I know, I know – if I write one more post about coupons you’re going to “unsubscribe” to this blog.

But couponing and discounts are all the rage, thanks to this sputtering economy and perhaps a changing American mindset about the value of saving money.

Many stations have launched adequate and even successful couponing programs, but in market after market that we visit, the commitment to scaling them up seems to often be half-hearted.  Stations are often so busy selling spots, that providing optimal results for advertisers and great values for the listening audience fades into the background.

Radio still needs to get its head around the fact that it’s no longer about us - our sales goals, and our needs to sell out our inventory at the highest rates possible.  The brands that we now compete against have sales goals, too, but they also have turned their attention to consumers and local advertisers because there is simply so much money there.

Gordon Borrell has been saying it for years – local digital revenue is a treasure trove that will only grow as more and more small businesses grasp its potential.  And how better to capitalize on this opportunity than radio – the medium with a retail footing, salespeople on the streets, and market know-how and history.

Except that’s what Groupon is doing, and they’re doing it well.  I may not love all the discounts that land in my email box every morning, but I like enough of them to have clicked “BUY!” several times over the past few months. 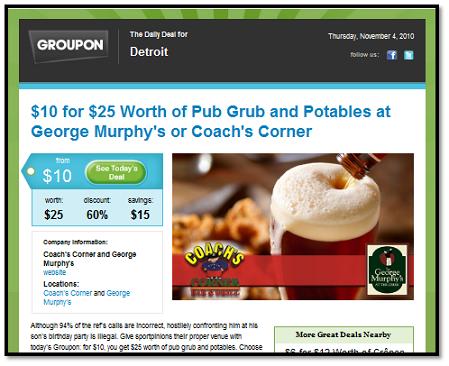 As if that wasn’t enough, Facebook is now in the game.  And this could be big.

Their “Places” feature is front and center on the Facebook mobile app.  It's their version of Foursquare and Gowalla.

But now they’ve flipped it around, so not only can you tell Facebook where you are, it can tell YOU about deals and discounts that are nearby.  “Deals” is potentially very powerful, leveraging Facebook’s gargantuan network of members and melding it with consumers’ desires to save money.

Once you click on “Places” and check in, a screen appears and the yellow icon signifies whether there’s a discount (see the graphic below).  You then open the deal and if you claim it, a coupon shows up on your phone.

2. Friend deals – Where groups claim an offer together, not unlike the Groupon model.

3. Loyalty deals – When you do business with a company or store on a frequent basis.

4. Charity deals – Businesses pledge to donate to a cause when Facebookers check in at their establishments or stores.

As Facebook recently wrote on their blog, “We launched Places to let you share where you are with your friends and see who's nearby.  Now with Deals, you also can see what offers are nearby and share those deals with your friends.”

It may take Facebook a while to drill this down to some of the local advertisers that radio depends on, but you can see the basic structure and how it works.  It is yet another clarion call for radio to protect its turf, and work closely to serve local advertisers and provide value for its audience.

"...thanks to this sputtering economy and perhaps a changing American mindset about the value of saving money."

Yes, Fred, as we both saw in LAB groups during a recent tandem market visit, when asked if they regularly visited the station site and open the station's loyalty club emails, 8 of 8 men said "Yes" to both. When asked if they (the men, not their wives/girlfriends) 'clipped coupons' (scissors & paper), 7 of 8 indicated "Yes." Add it up and it's pretty clear. And the "1/2-Off" or "50% Off" station deals usually come up a big positive. Perhaps not uber-hip relative to RockGirls, but then again, serving the listener always wins.

I think Groupon is fantastic. I have seen some really great deals.

It's interesting that FB is also trying to do the same sort of thing.

Clearly that is where the money is!