Alternative radio is having one of those best of times/worst of times experiences this year.

On the one hand, PPM numbers in many markets are outstanding.  Of course, KROQ rules, but that’s nothing new.  X96 in Salt Lake City and The Buzz in Houston are two wonderful stories about how Alternative radio is dominating two key markets.

On the other hand, the competition from the outside is fierce.  Pandora is a major issue among Alternative listeners.  And the format foundation of “new music first” is being threatened by no shortage of online and social sources.

As Slacker’s Matthew Bates (a former terrestrial programmer) told Richard Sands in a recent issue of The Sands Report, “Radio is at least five years behind all meaningful digital benchmarks.  Radio has demonstrably lost nearly an entire generation of listeners.”

But even though Bates warns against radio touting its historical cume strength and accessibility, those are indeed assets the medium continues to feature.

So to stay on pace with its fast-moving, digital-savvy demographic, the key may indeed be the mobile web.  A new eMarketer Daily article features the “ECAR Study of Undergraduate Students and Information Technology.”

This research shows that college students are more likely to have an Internet-accessible handheld device than they are to have a desktop computer.  The trend is unmistakable on college campuses everywhere: 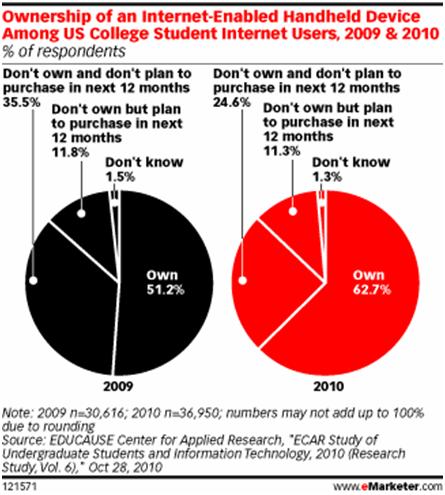 Of course, Bates also warns that the quality of the stream is something that broadcasters need to address.  “A streaming simulcast of the signal is a nice service to provide to your audience.  But your web simulcast needs to be up to snuff.  Audio needs to be normalized in both channels, the spot load gaps need to be utilized with meaningful content, and your mobile app needs to be better than a single-function white-label job.”

Thankfully, it’s beginning to happen.  More Alternative stations are moving into the mobile space, and the apps are getting more interesting, fun, functional, and additive to the brand. 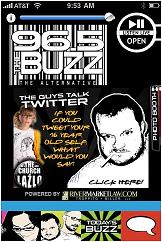 Entercom’s Buzz in Kansas City is a great case in point.  Aside from their audio stream, their great personalities are nicely showcased, listeners can access the station and its promotions, and there’s even a “comments” feature where fans can leave feedback.

The power of a great brand, the mobile-centricity of a young audience, and digital tools are all available to Alternative radio.

Because there is no choice.

And by the way, if you're wondering what college kids are thinking as they grab at mobile devices while leaving desktop computers behind, chances are good you'll be doing the same thing in the not-so-distant future.  As we learned in "The Bedroom Project" and other research we've seen and conducted in the past decade, what happens in high school and college portends what the rest of will end up doing.

Ain't it the truth.