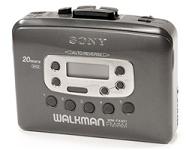 Many people probably think this happened a long time ago, but last Monday, Sony officially announced it will no longer manufacture a Walkman in Japan.

In the game of “Dead or Alive,” you might have guessed that the Walkman was essentially kaput shortly after the iPod took the world by storm. But Sony has been quietly making them.

These portable combo radios and cassette players that first hit the market in 1979 revolutionized the way that consumers enjoyed music.  While transistor radios ushered in this era, the Walkman allowed for both radio and personal enjoyment of music on tape – all in a nicely packaged portable format.

Today, the Walkman seems like another quaint antiquated product from the past.

But for radio, its official death in Japan underscores the location dilemma the medium continues to suffer from.  Because as the Walkman became obsolete, so did radio listening on the go.

But as we have observed throughout the past couple of years, the iPhone and other smartphones have revived the act of taking a radio with you wherever you may roam.

And fully-featured customized apps with branded content make smartphones that much more fun and compelling to own and use.  Broadcasters are realizing that stations can do a lot more with apps than just stream the terrestrial signal.  Your brand has a lot more depth and richness on a smartphone, instead of just being another preset on a Walkman. Blogs, videos, games, personalities, and event promotion are all part of the suite of features that stations are integrating into their branded apps.

So, Walkman, thanks for the memories.  And the quarter-hours.  And even that companionship you provided while cutting the lawn or whiling away time on the treadmill.

And for radio operators, let us indeed be thankful that after a decade of essentially no participation in the iPod phenomenon, radio can get its mojo back via smartphones.

There’s an app for that.