For the past couple of weeks, we have gone back into our JacoBLOG 2010 archives to highlight some of the most-read and/or most-talked about posts.  And so we end the year with the post that introduced us to the Consumer Electronics Association’s CEO, Gary Shapiro.  In “Buggy Whip, My Ass!” we discussed the need for radio to create viable mobile strategies, whether or not the NAB is successful in mandating FM chips into cell phones.

On the day it was originally posted (August 18th), Gary picked up the phone and called me.  We had a nice back-and-forth conversation about the NAB’s proposal and Gary’s reaction to it.  He left a lengthy comment that I am including at the end of the post.

From that exchange, we later invited Gary to appear at Summit XV earlier this month, and it proved to be one of our best sessions.  Paul and I will be heading to CES in Las Vegas next week to peruse the new toys and technology, and we will report back to you in this blog and on Twitter (@fnjacobs, @pauljacobsmedia). Maybe we'll run into Gary.  Meanwhile, an end-of-the-year inspirational post runs tomorrow, and then we’ll see you right back here on January 3rd.  Here's "Buggy Whip, My Ass!"

I’ve heard some tough schoolyard taunts in my day, but the assertion that radio (along with the music business) is a “buggy-whip industry” by none other than the head of the Consumer Electronics Association, Gary Shapiro, is painful.  Here’s his quote, published yesterday in Inside Radio:

“Rather than adapt to the digital marketplace, NAB and RIAA act like buggy-whip industries that refuse to innovate and seek to impose penalties on those that do.”

What are handset manufacturers thinking?  A trip to an AT&T store will tell you what they’re focusing on: 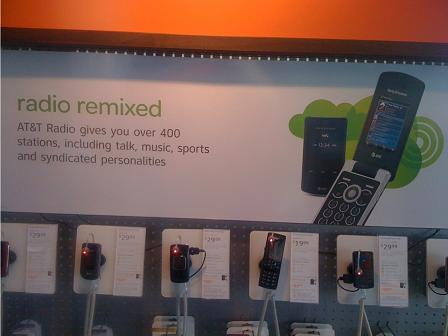 Rather than criticize the NAB for valiantly trying to turn those iPhones into digital Walkmans, we should take an objective look at the mobile space and how radio fits in.  The NAB deserves thanks for its efforts to mandate FM radios in cell phones, but it seems that there’s very little appetite among handset manufacturers to play ball.

So whether the NAB is successful in their lobbying effort - or not - what are the steps broadcasters could take to become viable media players in mobile?

Start innovating again.  Radio is at its best when it is developing controversial, humorous, or intensely local personalities, creating exciting new formats, and dreaming up bigger than life events that connect with communities.  Those are pathways that can help radio re-earn its place in the growing menu of consumer entertainment choice. The best app means nothing if the content is mundane or not very special.

Ask the right questions.  Radio needs to start researching what people are looking for - not yet another referendum on what we're programming.  What do consumers want and expect when it comes to news and entertainment, on-demand delivery, and greater accessibility?

Think about great brands.  While the mobile space is open to everyone, great local stations have a distinct advantage.  If station brands are strong, the chances of winning in this space distinctly improve.  This is why when you look at the desktop of most iPhones, Android handsets, iPads, etc., you see familiar, comfortable icons (brands) that you know and usually trust.  (I took a screen shot of just one of the pages from my iPhone at random, and you can see for yourself.) 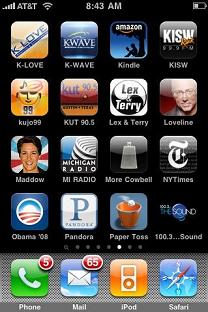 Then use great branding techniques.  A smart move would be to stop jamming hundreds of stations inside “umbrella apps” and hope that a mass audience will somehow find yours amidst all those choices.  Coca Cola doesn't market Diet Coke, Coke Zero, TaB, Hi-C, and Nestea together.  They are all strong brands, deserving of their own marketing plan and strategy.   If you have a great brand and a viable mobile strategy, develop a compelling individualized app that showcases your station and its unique benefits.  Or better yet, create several apps that enhance your special programming and features.  And even micro apps that loop in your advertisers to the exciting mobile space, so they can participate in coupons and geo-location, and as media thought leaders, radio can help them lead the way.

Use the power of your cume.  By acting like a client, radio can take advantage of the medium’s amazing reach to make consumers aware of new content, new platforms, and new innovations.  Create an app that’s fun, entertaining, does more than just stream, and reflects the emotion and passion of your brand.  Then tell the growing legions of smartphone owners inside your cume about it.  Acknowledge that there’s a device in their pockets and purses that is a lifeline and a connection to friends, family, and clients.  And become a part of that world.

Make it easy for consumers to find, enjoy, and access your mobile content – and make sure you devote enough time and attention on the air to drive downloads.  After nearly two years of app design and development here at jacAPPS – and nearly 275 apps and 4 million downloads strong – the metrics clearly show the download difference.

We now develop apps for brands that have nothing to do with radio, so we can see the struggles these non-radio companies endure to effectively get out the word to their consumers, members, and constituents in order to generate app downloads.

In radio, it’s a matter of scheduling promos and coming up with reasonably clever and compelling ways to tell the audience that you now have prime space on the best beachfront property of this new millennium – Apple and Android devices.  That’s what a healthy cume and a trusted brand can do for you in the mobile space.

If we act like a buggy whip industry, we deserve the put-down by a guy like Gary Shapiro.

The best way into mobile devices is to create content consumers want and then distribute it through mobile apps.  In that way, the “voters” decide who’s worthy and who is not.

It’s time for radio to walk the walk and send Shapiro, Congress, and the American public a message:

Thanks for the commentary and the great advice for radio broadcasters -

But you totally missed the point about why radio is now a "buggy whip" industry!

It is a "buggy whip" industry simply because the NAB is seeking a government handout for radio. Asking Congress to require a FM tuner in handheld devices is an admission of irrelevancy. Kind of like if a century ago buggy whip makers went to Congress and required a horse be put in front of every car!

But hey why stop there? Why not require FM radios in pillows, bicycles and computers?

Now maybe Congress will focus on the fact that radio is using borrowed public spectrum and most radio stations are unmanned and can't respond to a local emergency!

We will oppose any FM antennae and chip mandate but if it gets any movement at all in Congress we will insist the royalty be doubled and the wireless industry be paid directly by the radio broadcasters. Fair's fair.

Radio may be about sound - but the broadcaster demand of Congress is deaf to the reality that Americans do not want Congress mandating. Have some fun and google the blogs that wrote about this proposal this week and see all the consumer responses. In a slow news August, radio is becoming the laughingstock of the blogosphere.

The NAB demand that FM be mandated simply makes radio look like a desperate dying industry that needs a government hand out.