2010 is drawing to a close, and many media outlets have already gone through a tough budget process for the new year.  I’m betting that many of you will be challenged to do more with less.  And so today’s “Best of” post talks about how to best utilize the research resources you have – whether it’s that big perceptual study, a set of focus groups or Listener Advisory Groups, a music test, or even just an email database survey.  They’re all valuable, and there’s a way to use them to connect with your audience.

I was sitting in a perceptual research session a couple weeks ago reviewing a mega-telephone study for a cluster of stations we consult.  For the Classic Rock station in the group, the research pointed the way to some important action steps:  play more '80s, start a commercial-free sweep to kick off the workday, and make a line-up change at night.

From there, the typical conversation ensued.  We'll make those changes, of course, but then we’ll wait until we hopefully see some ratings indications that the new strategy is working.  Or perhaps we’ll wait until we're sitting around the same conference room table next year with a new set of research to check out in order to determine whether the audience ever figured out our action steps.

Then I flashed on a research study that we were a part of for Entercom's KNRK in Portland.  After a particularly telling set of focus groups and follow-up survey, programmer and strategist Mark Hamilton made his moves.  And then he did something rather novel – he launched a major, multi-platform campaign to promote the research and the changes they spawned: 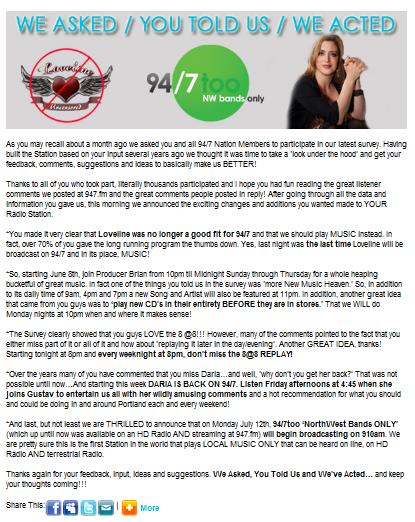 KNRK took to the air, to the database, and to social media to trumpet these improvements, and instantly engage the audience.

Meanwhile, Michigan Radio – the public radio news station here in my hometown – has gone through a similar process, using research to set up and stage important changes they’ve initiated.  It’s honest, transparent, and it positions their moves as audience-driven – which they were.  Programmer Tamar Charney personalized this messaging as you can see by the email below: 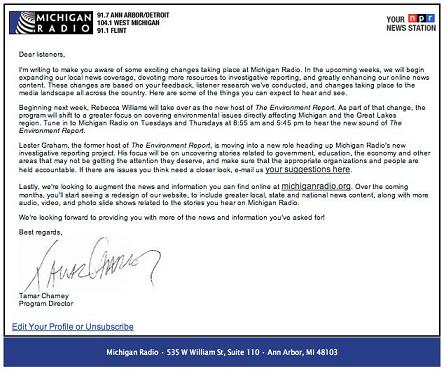 What does all this accomplish?

First, it gets the word out.  Nothing subtle here, and why should it be.  If the research indicates an action is a positive step with the audience, and the strategic team agrees, then why not announce it to the world?  So often in radio, we make our changes, rewrite our promos or positioning, and then hope listeners figure it out.  But this assumes they’re carefully listening and they care.  Hamilton and Charney used their air, their databases, and social networking tools to boldly announce audience-generated improvements.  In the busy lives of most consumers, boldly announcing these changes helps connect the dots.

Second, it accelerates the perceptual process.  Programmers don’t have to sit around and wonder whether they’ve noticed anything different about the stations.  The moves are out in the open, clear, and transparent.

Third, the process integrates the audience into the decisions and gets their buy-in.  This is a great example of what we at Jacobs refer to as "research is marketing."  If you're going to invest the money and time in conducting research, then why not get some credit for consulting the audience about your station, and give them a sense of ownership about the decisions?

Finally, social media is part of the engine that makes the process conversational and interactive.  Hamilton took these steps right to the station’s Facebook Fan Page.  And guess what?  A discussion broke out as listeners debated and talked about the station's moves.  Not everyone loved them, but listeners were certainly engaged and energized by the process.  By participating in this conversation, Hamilton was able to directly connect with activist members of the audience.  And by monitoring these comments, he was able to better learn how they were being processed and perceived by core listeners.

As a guy who's been doing broadcast research since the '70s, I am often dismayed about how little progress radio research has made during the past three decades.  Not only are we asking questions in essentially the same way we did back then, we are implementing the results with similar '70s sensibilities.

The world has changed.  The audience is plugged in, forming communities, and feeling very empowered.  They enjoy having a hand in their entertainment outlets, and they are often easy to engage.

Tapping into that and utilizing it as a catalyst for awareness and change is all part of how programmers – and brand managers - need to start thinking - and acting - differently.