JacoBlog - Jacobs Media's Blog: The Anatomy Of A Controversy

The Anatomy Of A Controversy

I learned something about the Internet last weekend.  And it wasn’t good.

We found ourselves embroiled in a story about Apple reportedly banning single-station iPhone apps in their iTunes Store. Of course, it turned out to be untrue.

But that didn’t stop the Internet journalism machine and scores of bloggers from continuing to reprint the same wrong story – again and again.

Here’s how it happened:

Jim Barcus who owns DJB (Digital Jukebox Apps) sells smartphone applications in bulk.  After apparently being told by Apple that his apps were no longer welcome in their iTunes Store, he wrote an emotional letter to the editor to Radio magazine (“The Radio Technology Leader”) on November 22.

The headline in Radio was “Apple Rejecting Radio Apps for iPhone.”

In his letter, Barcus described his company’s recent experience with Apple where his apps had been rejected because of “spamming” the App Store with many versions of similar apps.”  And he went on to say that as a result of Apple’s policies, “They are basically forcing all radio stations onto one app regardless of genre, age limitations, etc.”

Barcus also said he wrote Steve Jobs personally, and that the Apple CEO wrote him back with a “Sorry, we’ve made our decision” response.  Barcus urged radio broadcasters to call Apple to complain and/or to send an email directly to Jobs.

Things started to hit the fan on Wednesday, November 24, fueled by bloggers and one of the second-tier trades who simply printed Barcus’ letter as if it was a factual report on an Apple policy.  In short order, the Internet was full of similar stories, duplicate blogs, and angry comments lodged at Steve Jobs and Apple.

All of this was exacerbated by the long Thanksgiving weekend during which time it was impossible to check in with representatives at Apple for clarification.  But that didn’t stop the Internet beast.  It needed to be fed.  So the stories, blogs, and coverage continued unabated as various organizations and sites simply reprinted what was out there without bothering to check the facts.

Here’s a sampling of the “coverage” that filled the Internet over the holiday weekend: 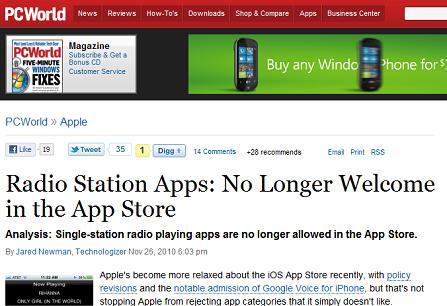 Note how some of these are from entities, writers, and blogs that perhaps you actually read and trust: And the hits just kept on coming: 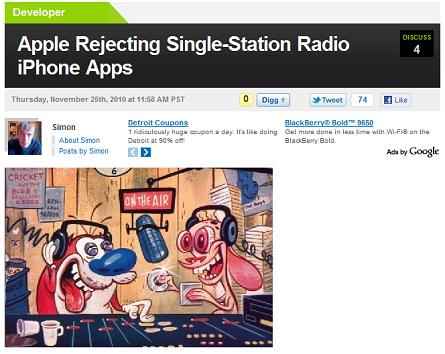 This one looks official: 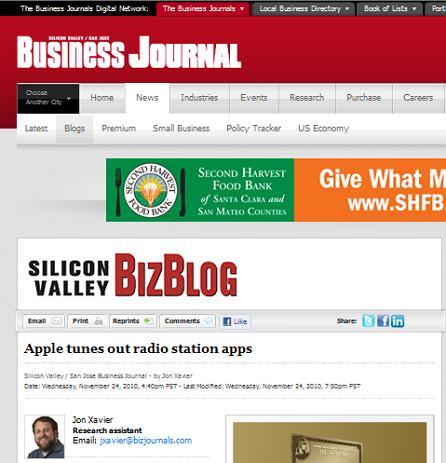 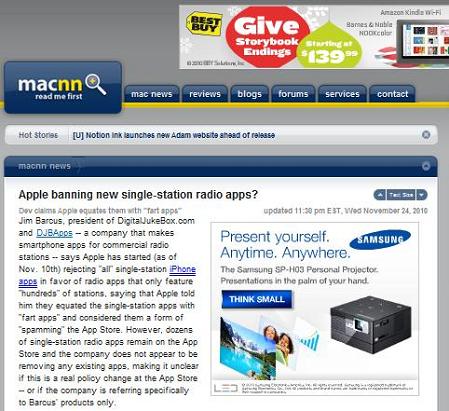 Wow, somehow even Geeky Gadgets got it wrong: 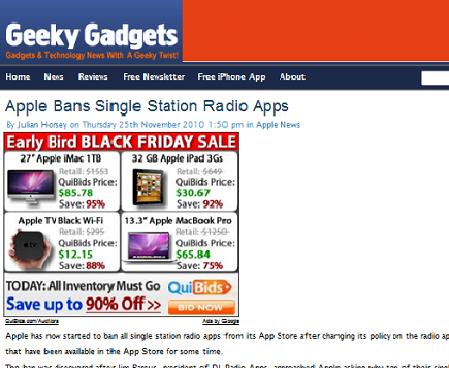 Notice how most of these simply duplicated each other’s copy on the assumption that it’s all true.  And also note how what started as a question became a statement of fact.

In the process, serious broadcasters and many of our app clients started to get justifiably concerned.  We did a little research in the iTunes store (which any blogger or reporter could have done) and saw that since November 10th (the day when Barcus’ apps were rejected), our jacAPPS division had several apps and updates approved by Apple.  And we also saw other developers of single-station apps having similar experiences.

But the questions, angst, and concerns continued online.  To the credit of a number of industry trades and reporters – including All Access, RAMP, RAIN, Radio Ink, Radio-Info, FMQB, Inside Music Media, and Daniel Anstandig – many took the time to call us to hear our “take” on this issue and we have to presume checked other sources as well.  Brida Connally of Radio Ink, Keith Berman from RAMP, Pat Gillen of AllAceess, Tom Taylor from Radio-Info, and Paul Maloney at RAIN all contacted us or did their own digging.  Paul Heine at Inside Radio concluded it was a “non-story” and didn’t print a thing.  We found it interesting that the radio trades – by and large – did a better job of getting to the bottom of the story than did the web-heads and bloggers.

The only notable exception was one of the secondary trades I alluded to earlier in this post.  They ran with the story on Wednesday, November 24, and despite several emails from us, pointing out the truth – from other trades and from iTunes screen shots – they persistently ran the “story.”  And as of early this morning when I hit "save" on this post, it was still prominent on their website – even in the face of clarifications from Apple.

So, what does this all mean and what lessons can be learned (besides sometimes long weekends don’t always live up to their expectations)?

First and foremost, when you read an incendiary headline, check to see if the most important sources are quoted.  And second, don’t jump to conclusions when you simply see the same story repeated numerous times without additional perspective or comment.  Finally, determine which news providers can be trusted to provide you with the facts and not just opinion or hyperbole.

But looking at the bigger picture, I’m afraid that the end of journalism as we’ve known it is getting closer than I thought.  And I’m not exaggerating.  The Internet is a wonderful thing.  It brings information and access to millions.  In some ways, we are more informed because of all this data flying through the big pipe.

But in other ways, we’re getting hosed.  At established media outlets – and they’re fading fast – the money and resources aren’t there to keep what were once buttoned up news operations well-staffed.  There were standards that the Fourth Estate adhered to, and they were non-negotiable.

But the Internet has ushered in an era of copy and paste, punctuated by bloggers (yes, I realize I’m writing a blog and you’re reading it) who just want filler and love a juicy story when they see one.

Whether it is true, or not.

Great piece Fred. The lack of journalistic standards, especially with follow-up and attribution appearing to disappear as electronic publications try to not only top one another, but Twitter-land also.

Great piece Fred. The lack of journalistic standards is disturbing and sad, especially with the lack of follow-up and attribution as electronic publications try to not only top one another, but Twitter-land also.

Thanks for the comment, Dan. Our company has enjoyed some of the benefits of sending out a release and simply having it reprinted. But a call for background and a little research would be welcome. What we're gaining in speed we're losing in accuracy - and ultimately, credibility.

Great summary Fred. Another point was how quickly these tech sites disseminated the info. One could deduct that they would be delighted by old media getting shunned, however I barely saw any associated comments.
Instead, I saw a passion that still exists (actually it has never left) for our business. We make remarkable radio content, and just the fact it was newsworthy in the blogosphere should make us smile.

Thanks, Mike. You bring up good points. It was indeed interesting to watch the debate and read comments that included radio right in the middle of the ring. All of these dust-ups lead to interesting POVs. If you hate/love Apple, you have a dog in the race. If you hate/love radio, there is passion on both sides.

And as we have been saying from Day One - with 5 million+ downloads to back us up - consumers love radio apps, especially ones that have rich assets, fun features, and reflect the essence of each station's unique brand and their local markets. Appreciate you taking the time.

We at Securenet Systems can in fact confirm via conversation with Apple reps on December 1st, that they are requiring each station to sign up as a developer, and then upload their single function app. There is a control factor, as well as the issue of collecting the $99 annual developer fee from thousands of stations, as opposed to a handful of developers that are building most of the radio apps.

Apple is not coming straight out in the media and blogs, but one read of their user's policy tells how they feel about single-function close apps.

Every developer will find out for themselves eventually, but they ARE NOT approving single-function streaming apps for radio from third-party developers. period.

As of this morning, we continue to have our apps for single radio stations approved by Apple. While it's clear that they are paying attention to the space, we an just judge them on their actions and their statements. If this changes, we'll inform our clients and make the necessary adjustments, but for right now, it's business as usual and we continue to create custom apps for radio stations.