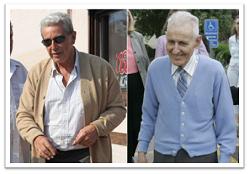 OK, I promise this is my last post that references the Golden Globe Awards.

But it’s hard not to ignore a trend that probably occurs in many pop culture honors shows.

Most of the best films honored this year were based on the lives of real people.

Colin Firth took home a GG for his portrayal of King George VI in The King’s Speech, while Carlos won for best mini-series, a story based on the real life adventures of Carlos the Jackal.

Let’s not forget the oft-honored Social Network, and writer Aaron Sorkin’s acknowledgment of Mark Zuckerberg in his acceptance speech.  Where would that Aaron Sorkin’s script be without the real-life weirdness of Facebook’s creators?

It’s a reminder to all of us on the content side of the street that people talk about other people.  It sells magazines, it makes for great movies, and it can be the source of great interviews on the radio.

Terry Gross, the host of NPR’s Fresh Air, has made her living by turning the focus of her show on other people.  You can laugh at Larry King, but his formula of shining the light on his celebrity guests kept him vital and watchable for decades.

But as both Gross and King would tell you, it’s not just about the “get” but what you do with it.  It's how you tell the story.  Whether it’s the amazing script for You Don’t Know Jack or the way that Terry Gross can make Green Day’s Billie Joe Armstrong come to life with questions like, “Were you medicated at all or in therapy, or told you should be in therapy when you were in your teens in school?”

Often in radio circles, morning shows talk to each other.  Or they book a great guest but waste the opportunity by not taking the time to truly prep great questions.  In the process, they fail to get that great story from a compelling person.

We are fascinated by people and their stories.  Radio, TV, and film have the ability to bring them to life.  It’s part of our medium’s special ability to transcend Pandora and iPods and weave a compelling tale.

When we take the time and make the effort to tell a great story.

Adversity toughens him as well as wounding him.I'm a strong believer in strong personalities and strong opinions