Sometimes it’s difficult to get our heads around just how pervasive and gargantuan that social media sites have become.  On top of that, the social media world looks a lot different today than even a few years ago, when Facebook was just for college students, while Rupert Murdoch was spending $580 million for MySpace.

Well, a clever way to better understand the magnitude and relative size of social media outlets is cartoon mapping, brought to us by XKCD called “The Map of Online Communities” and the marketing firm Flowtown, and it’s based on information right out of USA Today, Alexa, Compete, and other sources.

First, let’s look at the social media world as it was depicted for 2007: 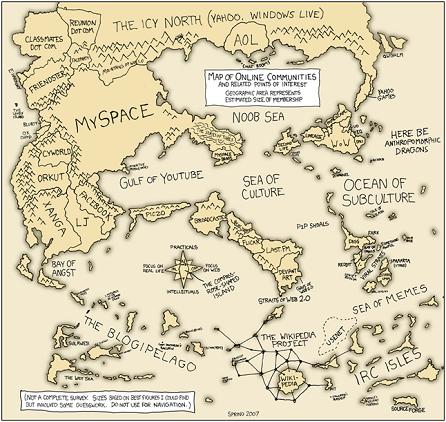 MySpace was massive, while Facebook (just to the west of the Gulf of YouTube) was even smaller than Classmates.com.

But a look at the updated map for 2010 shows a whole new world: 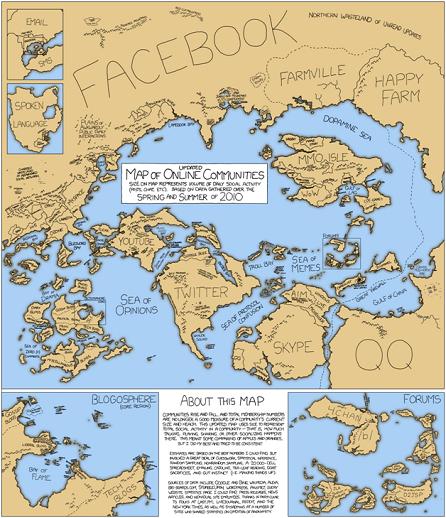 And MySpace?  It may take you a minute to find it.  It is southwest of Facebook, right next to LinkedIn and Hi5.  As the authors note in the explanation, size matters, but so does social media talk, play, and activity in the calculations.  It's no surprise MySpace just laid off 47% of their staff.

It is a reminder to us that the way the world looks today is very likely not how it will look three years from now.  That is why it has less to do about starting a Facebook fan page or sending out tweets, and much more to do with crafting a social media strategy that fits your station and your brand.

Understanding where your listeners or customers are right now is a good start.  And that’s another reason why our Technology Surveys are so critical to your planning process.  Tech Survey 7 will launch later in Q1, and you will be hearing more about it in the coming weeks.

It has never been more important to deploy your resources wisely and strategically.  That’s why we will continue to provide radio with current, trendable data to help you make these key decisions at this true media crossroads.