For a great real-life example, let’s look at Brendan Shanahan, formerly an iconic player who is morphing into an even better programmer… and marketer now that he’s an NHL executive.

The NHL All-Star Game played last weekend is a case in point.  Of all the all-star games, this one’s a turd.  (OK, the Pro Bowl isn’t much better.)

But instead of blowing up the concept, Shanny’s prescription was to fix it and make it better.  And he did that by tying into the jock/fan emotion and trying something potentially risky.

In every other all-star contest, the divisions essentially create the teams.  If you play in the West, those are the colors you wear.  And the coach simply looks down his bench to a team that is essentially picked by fans and/or the league.

But this time around, Shanahan went right back to the schoolyard.  We’ve all been there.  Two captains are appointed, and they pick the teams – or choose up sides.

All of those emotions that we all remember on the playing field are being shared by millionaire hockey stars, waiting to find out about their all-star pecking order.

As he explained it, “It was just, if a player could get his hands on (the all-star game), what would he do?  And this was my best guess.”

And he adds, “It’s something that all of us, especially in hockey grew up doing.  Stand back and the captains will pick teams.”  In this case, Detroit Red Wings defenseman Nick Lidstrom, and Carolina Hurricanes forward Eric Staal.

And what are the outgrowths of this change in format?

An NHL fan tweeted, the #NHL all star draft was pretty cool, enjoyed watching superstars sweating it out.

And the draft itself had no shortage of drama… and as it turned out, humor.  One of the unintended consequences was that not only did the choosing of sides aspect of the game take the players back to their youths, but the fans got all the wisecracking that came with it.  And it made for an entertaining show.

And unlike past years where nothing essentially happens leading up to the game, all of these questions started flying around bars, chat boards, and forums:

Who would be the first player chosen? (Eric Staal’s teammate, Cam Ward)

Who would be the last player picked? (Toronto’s Phil Kessel) 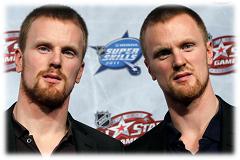 And would the Sedin brothers who have always played together finally end up on separate teams?  (They were.)

The game itself was a typical blowout – 11-10 in favor of Team Lidstrom.  But there were some surprises (a penalty shot in the NHL All-Star Game), not to mention that both Sedins survived being in different uniforms.

A great deal of credit goes to “PD” Shanahan for his vision and trusting his gut.  It made for something very innovative for a league that sorely needs it - especially from an event that universally dull.

And as in radio where programmers know a good idea when they hear one, wonder if Shanahan's brainchild will end up shaping the future direction of some of these other "all-sstar" games?

The "Draft" concept was the best thing to happen to the game (along with Raleigh's treatment of player intros, theatrics, hi-tech intro to the Skills Challenge) in a long time. U.S. average audience was up 1.1 million in '09 (no game in '10) to almost 1.5 million this year (a 1.2 rating) and up 50% across Canada. The NHL and the provincially-minded sport of hockey have a long way to go, of course. To start, the game is on the "VERSUS" channel (quick - can you tell me where that is on your cable or sat system? No? Go to "Showtime HD4" and keep scrolling... higher). As Jacobs Media's resident hockey freak, it pains me to make an honest comparison to typical Sunday audience numbers. Here's a look at 7 p.m. on same day as All-Star Game (audience, rating/share). More player showcase games in warm-weather cities won't hurt the cause. Keep doing the outdoor stadium-based "Winter Classic." And jeez, guys... get a mobile app... for every team, and for a special event like this, OK? The Superbowl has it's own app. I have every NHL team app... all 11 of them (there are 30 NHL teams).

I like the writing structure of your blog and it does a pretty decent job of presenting the material.