I remember the first time I logged onto AOL, and saw the little guy and the key connect to the Internet – well, it was pretty amazing stuff.

At its height, America Online was the way that many of us first accessed the digital world.  It was simple, straight-forward, and it worked great on phone lines in hotel rooms.  I still maintain an AOL address to this day, even though it probably sends the world a message that a part of me is still living in the online past.

Through its struggles, AOL has made many makeover attempts along the way.  A number of years ago, it began creating content in the hope of becoming a bona fide web portal.  But as I logged onto AOL the other day to take a look at what’s current and what’s hot, I ended up looking at this:

Now, it’s a nice home page, but there sure isn’t anything “must see” about it.

And of course, that’s the problem.  When the content is run-of-the-mill and not proprietary, is anyone going to go out of their way to access AOL?  Plus, the brand doesn't exactly communicate Web 2.0.

That’s a big reason why they’re paying north of $300 million for The Huffington Post.

It’s not about the politics or even Arianna.  For AOL, this deal is about accessing proprietary, buzz-worthy content they can use to build audience and generate revenue. (Isn't that what it's always been about?)

As AOL CEO Tim Armstrong explained it, “Our interest in buying the Huffington Post was about the social content and the future in distribution and, frankly, Arianna's TLC around the content space.”

No doubt about it – HuffPo is always a great read – there are always provocative think pieces, and it's a wonderful place on the web to spend time.  There's really nothing else like it. 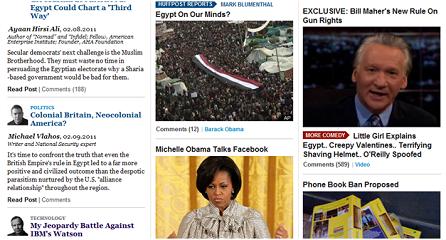 AOL has an ad/content system called Project Devil that will undoubtedly be woven into HuffPo.  And the AOL ad sales team will be turned loose, along with a new content creation – “Editions” – for tablets.

Is the sale of HuffPo a sign of new things to come for media companies?  And is this possibly a positive omen for newspapers, magazines, and other entities that have continued to invest in digital content, despite the “but we can’t monetize it” whining?

And does it also signify the potential for certain radio companies to reassess the value of their true content – not hardware, computers, towers, or transmitters – but the unique, proprietary, buzz-worthy content that will ultimately generate big ad dollars once the dust settles?  Whether it moves the needle in PPM or not?

The "little guy and key" were connecting directly to AOL's bank of modems, not the internet.