I intentionally try to avoid steering this blog toward politics because it’s a black hole (are you listening, morning guys?).  But sometimes, the confluence of broadcasting and our legislalative process is unavoidable.

We’re at a crossroads right now as Congress (the House, so far) has voted to take away the Corporation for Public Broadcasting’s funding.  That’s $430 million out of a total of $61+ billion in cuts.  What does this mean to radio?

It would be easy to just view this action as fiscally responsible if you weren’t paying attention to the political undertones.  As Tom Taylor pointed out in his column last week, a number of Republican House members (Doug Lamborn/CO, for example) are mixing ideology with economics.  At its root, there’s an ongoing belief that public broadcasting (and often aimed at NPR) has a liberal bias. 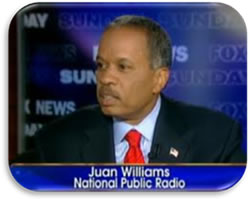 Of course, there are numerous surveys that refute that assertion, but let’s not let logic and objectivity get in the way of the budget bulldozer.  Some commercial broadcasters I speak with have an ongoing bone to pick with public radio.  Maybe it’s because some of the public radio stations perform extremely well in key markets (San Francisco, Portland, Boston – among others).  Do these public radio winners really erode commercial radio revenues or is it more a matter of losing a rank position that is at the heart of some of this anger toward public radio?  Or is it just the idea that tax dollars help subsidize one form of broadcasting, while the other had to fend for itself in the advertising jungle.

But while all these issues are valid discussion points, what about the bigger picture of serving the public interest?

Juan Williams aside (and sadly, his exit was handled with the same lack of style and grace that commercial broadcasters have employed at times when ridding themselves of controversial personalities or those who simply seem to cause problems), NPR, PRI, and local public radio stations provide programming that other operators simply can’t or won’t develop or fund.

This is no knock against commercial radio – it’s where our company makes the bulk of its living.  But most commercial stations are about fun and entertainment.  You don’t listen to them to necessarily get smarter – you tune in to have a good time.  To a great degree, commercial radio is often analogous to TV reality shows or cop dramas – programs that will keep you company and provide a little fun in your day. They are designed to appeal to a mass audience and there’s nothing wrong with that.

Public radio has a different mission. It's not going for everyone. It doesn’t shout or scream. It's not about breaking news or supporting one idealogy over another, but providing some perspective on what's happening in our world.  When it’s on its game, it provides a forum, offering contrasting views in a civil, fair, and considerate setting.  It doesn’t accomplish that goal 100% of the time, but it comes pretty damn close.  That’s why more educated consumers listen to it.

In that context, I took a look at our Tech Surveys and went right to the education charts because they tell a story.

Our most recent commercial radio survey that includes core Rock radio listeners (who I would argue represent a large portion of the commercial audience because we track Alternative all the way through Classic Rock/Hits) looks a lot different than our companion survey that we conduct for Public Radio each year.

Below are the two educational breakdowns from the most recent Rock poll juxtaposed with our newest Public Radio survey.  Each has more than 20,000 respondents.  Eight of ten public radio listeners have a college degree (and nearly half hold post-graduate degrees), compared to only about a third of our commercial Rock radio fans. 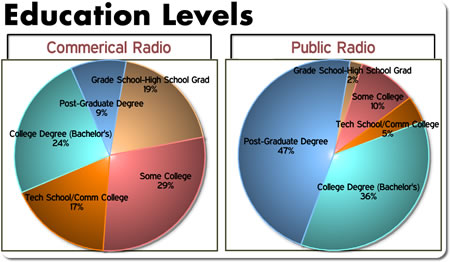 So, public radio clearly targets a different, better educated audience.  Commercial broadcasting has essentially made the decision in most markets around the country not to target these listeners.  That’s fine.  But somewhere there has to be programming that comes out of terrestrial radio that supports a better educated, different kind of listener.

That’s why I was pleased to read that my local state broadcasting group – The Michigan Association of Broadcasters – has stepped out and taken a stand to support their “brothers” in public radio.  Led by Rich Homberg (a former commercial broadcaster from CBS Radio and now the GM of WTVS in Detroit), the MAB has produced a video supporting the balance between education and entertainment, commercial and public broadcasting.  Homberg comes at it from the public TV angle, but it’s very much a radio thing, too.

The loss of CPB funding is controversial on many fronts, and it is not my intention to get into a long-winded debate with you.  But when you think about how so much content is being created beyond the confines of commercial broadcasting by digital providers, it is essential that AM/FM RADIO offers a full array of entertainment, talk, music, and local programming.

I know that some of you may feel the government should not support public broadcasting, or that these stations siphon dollars away from commercial broadcasting.  I would invite you to look at the parking lots of public radio stations anywhere – no one’s getting rich working at these places.  Most are in public broadcasting because of a love for the game.

We often talk about the need for passion at our stations.  Maybe the “P” in “public” could double for “passion.”  In the large world of AM/FM radio, we need more of that, wherever it comes from.

Full disclosure: We work for a number of public radio outlets.

Great piece Fred! Just a clarification: The WTVS video was produced by WTVS itself and provided to the MAB.

Thanks for the clarification, Dan. Best to you and everyone at the Michigan Association of Broadcasters.

Educational breakdown, eh? So if the more "well to do" listen to Public Radio/TV, then they can cough up in donations to make up for the lack of government funding, no? Oh wait, that would mean there's a link between higher education and higher earning which there is not. Oops, sorry.

The public radio station in Dallas-Fort Worth plays alternative, indie rock. It's about as "educational" as a Trashcan Sinatras concert. And, yes, NPR, especially NPR news, has a definite left-wing bias. And I'd rather listen to a spot break any old day than those wretched and annoying pledge drives!

Thanks to all for the comments. A few thoughts in response. First, no one is saying there should be a correlation between education and earnings. One thing has nothing to do with the other. It is about serving a larger audience for terrestrial radio.

And not every public radio station is necessarily "educational." But most strive to provide alternatives to commercial radio by providing different programming offerings. It isn't always successful, but that's the goal.

I remember a few months ago when the public broadcasters first responded to the possiblity of losing these funds and they all seemed to say that only a small portion came from the US Taxpayer (maybe US BORROWER) but now the other side of their mouth seems to cry gloom and loss of programming.

I don't know which side to believe but I REALLY don't understand why I haven't read a single word about the POTENTIAL of resetting the rules regarding the sale of advertising instead of asking for underwriting.

If I was still working for a pair of NCE college owned stations, i'd be jumping for joy at the chance to change the way these stations are can sell their time and influence.

My sense, Tom, is that funding is very much a market by market situation. There are large market stations and well-established outlets that are probably in great shape. And there are smaller market stations that need the financial reinforcement.

The underwriting point is an interesting one. I don't suspect that most public radio stations have a huge desire to start selling "spots," but given some of the ratings of some big players, you never know.

Another angle to the underwriting situation is that if public radio stations are forced to generate more dollars on their own, they become yet another competitive threat on the local market scene, and that's probably something that their commercial radio brethren wouldn't relish.

Thanks for taking the time to read our blog and to comment.