What happens if you keep hearing a story over and over again?  Do you start believing it may be true?

Well, you should when it comes to trajectories, tendencies, and technology.  Because as we’ve been preaching for several years now, following young people’s media and gadget habits isn’t just interesting – it’s a window to what the rest of the world will be doing.

In the radio industry, however, youth is still problematic, as the majority of “buys” fall in the 25-54 zone.  Thus, there’s still an aversion to researching what’s happening with teens and 18-24 year-olds.  If we can't make money on them, why talk to them, right?

Yet, young people in high school and college hold the secrets to better understanding what adults will be doing in the near-term.

Today's supportive data comes from the recent Pew Internet & American Life Project – a wonderful source of data and knowledge that is worthy of your time.  You can read the entire report here.

Pew interviewed 3,001 adults 18 and older (imagine if they included teens) to determine which gadgets and devices each generation owns.

The results aren’t surprising, and they reinforce what you already know, especially if you have kids in their teens and early 20’s.  What they’re doing, will be doing.

And you can also get a sense for the arc of gadgets.  And again, laptops and desktops are flattening out, while mobile devices are on the move.  At the very bottom, you can see what’s happening in the exciting new space of eReaders and tablets, already beginning to have an impact. 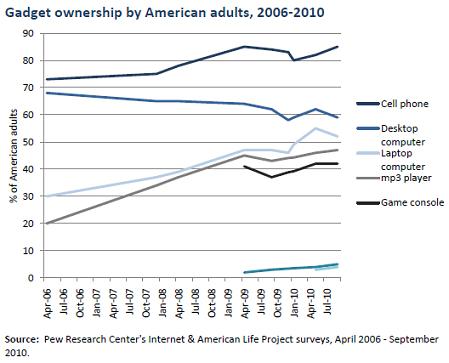 What does this mean to you?

Second, even if your target is adults – or even mature adults – technology is rapidly becoming a part of their lives. Gen Xers and Boomers aren’t far behind their kids when it comes to gadgetry and media consumption.

Third, this study once again screams for the need for every brand to have a mobile strategy.  That’s a common theme in this blog, and I won’t go into a diatribe about it in this post.  But the numbers and their arc don't lie.

And finally, consider how tablets and eReaders are changing the way that people are using traditional content.  This past Christmas season, the sales of Kindles, iPads, Nooks, and similar devices exploded.  And all of a sudden, book sales and readership are rapidly rising (while brick & mortar bookstores like Border's are dying).

Is this a harbinger that in-vehicle entertainment has the ability to increase media use while driving?  While there’s more fragmentation, there’s also excitement about the many options a driver has while journeying from Point A to Point B.  May the best content win.

Check out the Pew study for yourself, and better yet, keep an eye on your college student because she offers a window into the future.

We can learn from them.