I’m back from Canadian Music Week for another convention in cold, rainy Toronto.  I have been to many of these conventions in the Great White North, and I’m always impressed by the enthusiasm and the great attendance they generate.

This year, I was proud to present “Goin’ Mobile” to an overfilled meeting room (yes, it was hot and sweaty).  And I was able to attend a number of sessions along the way, too.  One was “Radio Stimulus Package.”  For the second year in a row, CMW brought together industry luminaries to discuss and debate what radio should do to revitalize itself.

The format is simple - this august group of well-meaning, grizzled, industry vets (mostly older white guys) do their best to fill six minutes with meaningful advice about what radio ought to do to solve its myriad problems.

And while this year’s group did their level best, I’m beginning to think that the way to reinvent this session - and maybe the broadcasting industry, too - is to flip the funnel and let some of radio’s less famous folks do the heavy lifting.  After all, you’ve heard from all of us – in our blogs, at conventions like CMW, and in the trades.

But just like the rest of our world, everyday folks – in this case, radio station employees – might have more answers than we think.

If you remember when we did our session, the 10th “President” was no one really famous.  We opened up that last slot to anybody in the industry with good ideas.  And our choice – Julian Nieh – was the unheralded night guy at B96 in Chicago. (He has since graduated to mornings, by the way.) And Julian did a great job, earning the respect of the more than 200 attendees at our Jacobs Summit. 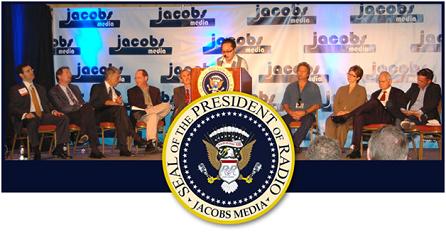 But what if there was an entire panel of “nobodies” whose only qualifications were dedication to radio and time spent at various stations? My gut is that they’d have some good ideas that have formed on the front lines – in production and air studios, at remotes, and in kitchenettes.  Maybe even in sales cubicles.

Well, the fact is, you don’t have to wait for the next Summit or CMW to test drive this.  You could host a brainstorm/meet-up at your station or in your cluster any time you like.  For the cost of some pizza and a little time, you could find out what's percolating in the minds of the staffers in your cluster.

In speaking with colleagues in the business, I am getting a feeling that more and more off-sites with this theme are quietly taking place, where everyday rank-and-file workers at stations are being included.

The top-down nature of consolidation has all but cut out the little guy (or gal) from the process.  As corporations and CEOs dominate the trades, there’s not much room for the production guy, the traffic director, the part-time jock, or the sales assistant to have much standing or a voice.

But in fact, they are the backbone of these stations, and in many cases, they quietly see radio’s reach – the true impact it has on people and communities. Here’s my bet with you.  Host a station or cluster “town meeting.”  Make it inclusive.  Invite the staff, or hold smaller versions with more manageable numbers of employees.

Air it out, talk about it, watch, listen, and observe.

If you don’t come up with some great ideas, I’ll get off this “Poke the Box” bandwagon. I promise.

But I’m confident that good will come of this, the staff will feel a greater sense of belonging, inclusion and worth, and you’ll come up with initiatives that can help your operation grow.

Now that would truly be stimulating.