Every time you turn around, it’s another one of those polls or city rankings that are designed to get you talking and generating lots of tweets.

Well, earlier this week, it was the pecking order of America’s cities based on their "social networkiness."  (I made that one up, not Stephen Colbert).  Yes, Mashable reported on the 100 most socially networked cities in the U.S., thanks to an elaborate study from Men’s Health.

They aggregated Facebook users along traffic from MySpace (that couldn’t have amounted to much), Friendster, Reddit, and Digg.  They even glommed in households using chat rooms and blogs.

And what do you know – Washington, D.C. is the standout city for social mediology, while Detroit finished at the bottom for big metros, and at #94 out of 100.  At the real bottom was El Paso.  And Fresno, Bakersfield, Lubbock, Stockton, and Laredo somehow finished below the Motor City, too.

My Detroit clients were wondering about what this all means, and they raised good questions about whether Motor City residents are living in some dark age.  But there’s evidence to the contrary, and I’m here to tell you about it. 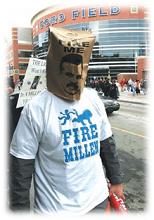 A similar ranking – this time on the social network prowess of NFL teams – came out last fall.  And while America’s Team, the Dallas Cowboys, was on the top of the heap, the surprising runner-up was none other than the lowly Detroit Lions.

Now you’re probably wondering how on earth this could happen, but the Lions finish in this social media horse race says a great deal about the space.  You see, the Men’s Health poll is more about raw numbers of social media friends, followers, and clickers.  But the Lions success in this area speaks to perhaps more important measures.

Despite the team’s abysmal record over the past few decades, Lions fans are perhaps the most passionate in America. It’s not always good passion, but of course, that’s what makes relationships.  If you think about the people you’re closest to, not all your interaction is light and positive.  Sometimes emotions flare, and love and anger can co-exist.

And that’s what the Lions have been up to since QB Bobby Layne put the curse on them back in 1958 when they traded him to the Steelers.  The Lions have pretty much sucked ever since, but that hasn’t stopped their fans from generating mass quantities of emotional furor, second only to Jerry Jones and the Cowboys.

If you don’t buy into this notion that real social networking is about relationships and not metrics, then check "The Bible."  Arbitron released radio ratings for every NFL team in a PPM market. 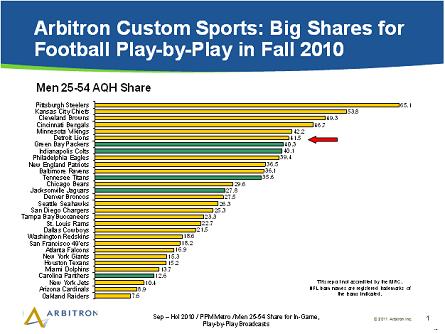 No surprise – the Steelers are right on top.  But then as you work down the list, you can see those Lions sitting at a cool #6 with better than a 40-share of 25-54 men.  Not too shabby for a team that hasn’t won a playoff game since the first Bush administration.  And that’s George Herbert Walker.

That speaks to passion, and passion is what makes relationships, and relationships are what social media is all about.  When Detroit fans see Honolulu blue and silver, they see red – and they wear their emotions on their sleeves.  (Can you imagine what will happen when this current group of Lions finally makes the playoffs again?)

So whether your city is in the top ten in this new Men's Health survey or hanging around near Detroit, your social media standing as a radio brand is in a different league.  What does your station do to stir up passion?  How are you moving your fans?  What kinds of relationships are you building with listeners in your town?  How is your staff connecting on an emotional level with the folks who tune in the radio and those who choose to advertise on it?

The answers to all those questions say a lot about your success in the areas called Facebook and Twitter.  Are you creating metrics or are you nurturing relationships?

That’s what "social networkiness" is all about.