A recent New York Times article underscores something that we saw loud and clear in “Goin’ Mobile” – smartphones are replacing other gadgets and changing our lives in the process.

At the Worldwide Radio Summit in Los Angeles next month, I’ll show a different radio-ized version of “Goin’ Mobile” and one of the new segments we've put together will address the ways in which other gadgets are being relegated to the background because of smartphone use.

This includes GPS units, alarm clocks, camcorders, and even iPods.  And then there are all those functional apps that have replaced many books, tools, gaddgets, and other resources, usually for a much lower cost.  The Times actually calculated how much money one might save by foregoing the purchase of these “ancillary devices” as a result of owning a great smartphone:

Here’s how they figured it:

Considering a smartphone and a solid data plan costs quite a bit less, you can see how much more efficient our lives have become as a result of the iPhone and similar devices.

To put it in perspective, we have long talked at Jacobs Media about if the iPhone was instead originally marketed as a Mini-Mac – a handheld computer that provided email, texting, a GPS, alarm clock, calculator, camera, camcorder, mp3 players, and yes, also a phone.

The fact that these devices started as phones, and then became all these other things perhaps explains their success. At the outset, we all needed a cell phone.  Marketing them as Swiss Army knives was the next step in their evolution. 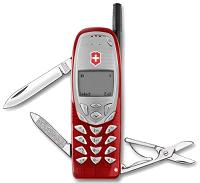 And then I remembered that back in 2007 for “The Bedroom Project,” Tim Davis built this graphic that I’ve included here for the section we put together about cell phones.

It says a lot about how far we’ve come, and how the smartphone’s influence has magnified in our lives.  It is estimated that by the end of this year, half the population of the United States will have a smartphone.

And as consumers become more comfortable with all the things they do and the efficiencies they provide, it becomes critical that if you’re Garmin, Bulova, JVC, and other manufacturers whose devices are essentially incorporated in smartphones, perhaps you partner with smartphone manufacturers to possibly include your brands in their software packages.

Of course, I could have mentioned any number of radio companies here, too, because that’s essentially what Pandora is doing in as many gadgets as they can.  Clear Channel's purchase of Thumbplay is a sign that broadcasters now have Pandora on their radar sreen.

As we said in the “Goin’ Mobile” presentation, the smartphone provides an opportunity for radio to be a part of the greatest gadgets of our lifetime.  But there is no entitlement.  We will have to earn our places on these devices.

As Fred well knows, "Tip Calculator" and "Alarm Clock" have been among the top "Uses for SmartPhone other than making calls" in our past Tech Surveys (JM TS7 in field now). The last functioning alarm clock in our house broke recently, and has not been replaced. As for tips, I do my own math.