If the name of today’s blog post looks a little strange to you, that’s a sign that what happened in Austin last week is something you should know about.  Our digital dude, Tim Davis, is back – a bit tired but inspired – from South By Southwest Interactive.  And here’s a summary of his time at this mega-conference, trying to fit in every great session.  A detailed version of this post will be available soon at www.jacobsmedia.com.

I'm fresh back behind the keyboard from a fast-paced weekend in Austin for the 25th anniversary of SXSW.  Having been to the first 10 of these as a college radio/Alternative programmer, it's novel to reappear 15 years later - and only attend the interactive portion and not the music part.  (Although it's a safe bet that iPhone cases outnumbered guitar cases for the first year ever.)

Nearly 35,000 of my closest friends registered for this year's event (up significantly from previous years) and an already overcrowded city was pushed over the edge at some points.  But the local restaurants and bars were clearly up to the task, and happy to welcome the record-setting crowd.

Here are some of my takeaways and highlights:

Social Media is the common thread of everything.  Whether it's mobile, at home, or in car, the real-time web of social media is at the forefront of communication and marketing right now.  Even the most Luddite of companies is looking at social media and asking questions.

It's for this reason - and others - that we recently added Lori Lewis to our team as a Digital and Social Media Strategist for Jacobs Media and jacAPPS.  She's got first-hand, real-world experience with developing campaigns, tracking them, monetizing them and duplicating them in new markets.  Look for more from Lori in this space in the coming weeks.

If it's got an "i" in it, people are into it.  All things Apple from hardware to iOS drove the many conversations, debates, and topics in the majority of panels.  (It didn't hurt that the iPad 2 came out the day SXSW kicked off!)  Apple didn't even have a booth and I didn't see a single Apple employee (they had to be there, right?) during my three days.  But the ears in Cupertino would certainly have been burning 24/7 at SXSW Interactive.  They were dominant without being there.

UI/UX is Ubiquitous.  These previously tech-centric acronyms are being bandied about in research panels, in marketing conversations and among people who don't know RAM from ROM.  “User Interface” & “User Experience” are pivotal in how people are communicating and how companies are interfacing with them.  If you don't know those terms (UI/UX) and some of the founding principals, you may want to do some Googling of “User Experience” and think about it in terms of radio programming, marketing and sales.  It’s a topic that is often missing in radio conversations, but at SXSW Interactive it was everywhere.

Usability isn't just for the pros anymore.  Just as authors such as Stephen Krug have brought web usability to the masses, the topic of usability studies for apps (or just to see how consumers are using your product) came up repeatedly.  All the more impressive is the array of available tools that allow for remote usability studies.  No longer do you have to bring the participants to you - you can do eye tracking, heat maps and behavior studies from consumers’ homes or wherever is most appropriate to the study. Bottom line, however, is that research is moving towards a path of learning from behavior as much as statistics and metrics.

Research is morphing from the traditional to the dynamic. As noted above, there's a movement in the tech world to find more - and better - ways to track success.  I hit panels with topics from using the Net Promoter Score in Social Media to Right Brain/Left Brain (quantitative vs. qualitative research) challenges.

Check out this nice infographic sketch by Len Kendall that summarized one of the more vibrant and interesting panels I attended which was very research centric called "Stop Listening To Your Customers": 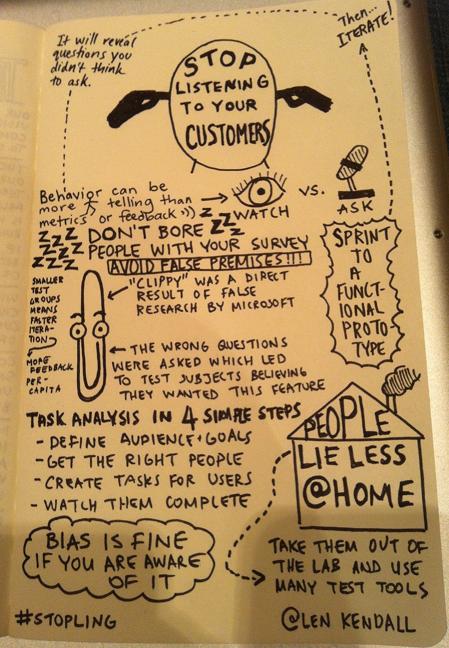 This session was presented by Mark Trammell, the lead design researcher for Twitter (he paid audience members who asked NON-Twitter questions with donuts!), and Nate Bolt from Bolt/Peters also an author and expert on User Experience.  The gist of their entertaining session is well captured in Kendall's image above, but the underlying theme of these sessions is that observation is fundamental.  Simple surveys still have a place, and they are ubiquitous - with services like Survey Monkey, SurveyGizmo, Checkbox and others.  But we're entering an age where quantitative alone won't get you to the finish line.

And...Apps!  Tying it all together - from research to user experience and social media, the darling of the tech world is mobile apps.  The world is divided into two camps: one that says apps are the end-all-be-all, and the other that considers them nothing but a fad with only another couple of years left.  No matter where you fall on that spectrum, you would have to have been in a cave to miss the dozens of panels on mobile apps- ranging from UI/UX, to iPad-specific design for Boomers, to content questions and data feed development protocols, etc.

A snapshot in time?  Keep in mind I chose my panels, and so my “take” is relative to what I do for a living and where my interests lie.  You could have just as easily found scores of sessions on education, "doing good in the world," and more technically focused panels for developers/programmers.  I tried my best to get a solid cross-section of the offering at SXSW Interactive.  Objectively, the Social Media track blew the doors off of everything else in terms of quality and quantity, with all-things Apps (if you include the 20 panels on how cool it is to own an iPad 2) being a close second.

There's a myriad of other topics that stood out, and some of the points above warrant more digestion and distillation.  In the meantime, it's safe to say if you’re in communication, entertainment, marketing, software/web development, social media, or anything technical or creative, SXSW is where you should have been, and hopefully will be next year.

I'll follow up next week with a blog report on Guy Kawasaki's session at SXSW Interactive, and an incredible graphic that summarizes the session beautifully.  Have a great weekend.

As the locals here in Austin like to call it... South by So What!

You may not have noticed it, but apple had one huge presence here this year. On the corner of Congress and 6th a temp Apple "pop-up" store. Last Saturday they had folks cued around the block to buy the latest fondle-gadget.

On a personal note, after being out of the radio biz for about 2 years now (I'm now an Apple Consultant and Apple Certified Technical Coordinator here in Austin) how is everyone affording these iPads? At at least 500 bucks a pop, with so many people out of work and the economy generally in the crapper, who is buying these? A million estimated in the first week! I guess the same folks who can afford over a thousand dollars a year for a telephone! If the economy really is as bad as it seems, a lot of people are undoubtedly eating a lot of "dog food" to pay for these fondle gadgets!

Hey, at least listening to the radio is still free!

Good to hear from you, John. Apple's timing with iPad2 - impeccable, of course. I have also pondered how with a horrible economy, people are finding a way to buy these luxuries. But perhaps that's the point - Apple and other companies have made them necessities. How can you live your live without an unlimited data plan.

Yes, radio is still free - and wireless, too. Hope you enjoyed SXSW.