They Shoot, They Score 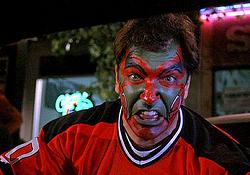 When you think of rabid fan bases, you think of sports teams, and yet many of them are only doing the basics of social media – which is not unlike what many radio stations are doing.

Not long ago, pioneers like Dallas Mavericks owner Mark Cuban and Washington Capitals & Wizards owner Ted Leonsis were at the forefront of social media for the simple act of answering emails from fans.  While stations have mastered that art form as well, many have light years to go before truly hitting that level of full integration and communication in order to make social platforms a destination.

The New Jersey Devils of the NHL have taken a major step toward integrating social media and fans.  I don’t know about you, but when I think of the Devils, I think of Puddy from the old Seinfeld show.

Maybe he could have been one of the “Generals” that was recently announced by the Devils as part of their new “Mission Control” initiative.  It’s the first of its kind in team sports history.

What’s different about it?  They’ve actually dedicated space to fully monitoring every aspect of their social media initiatives from blogs to Twitter to Facebook.  But what makes it truly unique is that much of the staff is made up of real fans, dubbed Devils Army Generals.

The Devils have identified and hired 25 diehard social media savvy fans to man “Mission Control.”  These Generals monitor and engage fans through social media using nine monitors, 10 iPads and two HDTVs to ensure that the organization keeps it pulse firmly on the conversation at all times.

In essence, the Devils have crowdsourced its social media efforts in a clever way at a time when most other businesses have yet to hire even a single person dedicated entirely to social media.  Certainly, that’s the case at the vast majority of radio stations.

It starts with a plan and a will to execute it.  Social media author Greg Verdino told us last summer, “Everyone in the audience has an audience.”  Connecting some of your best customers and most savvy social mediologists to their networks is just a starting point for communicating with fans. Allowing fans to connect with the team when and where they want is at the heart of this strategy.

The Devils have the right idea.