The story hit last week – Facebook now has more than 250 million mobile users.  Those are big boxcar numbers.  In our “Goin’ Mobile” study for Arbitron last year, all 18 of our smartphone owning respondents had the Facebook app on their mobile phones.  That was all we needed to see. 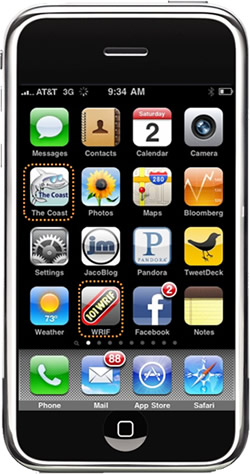 I was fortunate to present “Goin’ Mobile” at the Oklahoma Association of Broadcasters Convention last week.  This is always a great event, and this year’s conference broke attendance records.  It speaks to the passion that broadcasters in Oklahoma have for radio and TV, and the hard work of Vance Harrison, OAB’s head guy.

At the end of the session, a couple of broadcasters approached me to talk apps, and the question I’ve heard dozens of times came up: Is it better for a station to have its own individual app or better to be part of an aggregated or “umbrella app” where hundreds of stations are grouped together?

With all due respect to both Clear Channel and CBS Radio who have chosen the latter path, our sense is that the big winners in radio appdom are the stations that have stepped out, developed their own apps, and then marketed them aggressively to earn their place on the iPhone or Android “desktop.”

Think about it – a radio station as massive and popular in Detroit like WRIF on the one hand, or the hometown rocker in Mendocino, California  like The Coast (KOZT) on the other hand, can each live next door to that famous Facebook “F,” Google Maps, the New York Times, and yes, Pandora.  That’s a pretty cool, desirable, and upscale mobile neighborhood.

It's also remarkable product placement, and while great visibility on this mobile beachfront property is not as easy as earning one of those five pushbutton presets on you old GM Delco car radio, the rewards may be even greater.

Yes, iheartradio has become a brand and a destination, but what about the hundreds of local stations that are tethered to that “umbrella?”  To the consumer, is it about Clear Channel or it about WDVE and KIIS-FM? Radio’s salvation will be its strong local personalities, brands, and connectedness to communities.  Individual station apps can be those conduits that showcase those great jocks, podcasts, videos, and other brand assets.

As more and more automakers provide the connectivity for smartphones with their in-vehicle systems, easy accessibility will make it even better to access your station in a cluttered car environment. 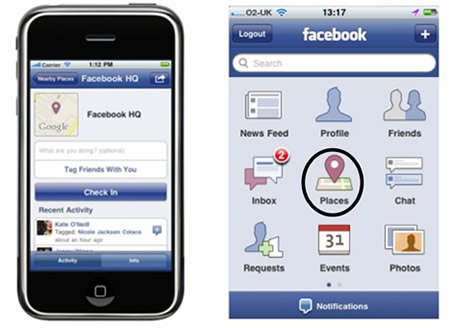 Facebook’s new milestone also means that their Places feature (shown above) – connecting its users with coupons and deals wherever they go – is another signal that local radio will need mobile coupon strategies to keep pace with players like Groupon, Living Social, and of course, the mighty Facebook.

Once again, an individualized station app will be radio’s entryway into the world of mobile.   Research for radio needs to encompass key mobile questions, and our Techsurvey 7 – now in the field – will do just that.  And I suspect that this will also be a topic at RAIN Summit West in Las Vegas later this month as I am proud to be on a panel with Liquid Compass' Zackary Lewis and Bonneville's Mark Preston, hosted by McVay's Dan Halyburton.

Clearly the locally branded app is better - its sad that radio is so out of touch that its even on the table as an issue.

Pandora offers better sound/fewer commercials than radio and can be customized as many ways and times as you want. Radio can be local. And it won't be long before Pandora offers personalities with local references (they can track as well as radio can) too.

Any opportunity radio has to be local vs. national should default to local, IMO.

No surprise, Bob - we agree on all points. Apps need to do more than stream a local station's on-air programming. And great brands deserve their own apps. It is about the "L word" - radio's secret sauce when it comes to personality, the community, events, and vibe. Thanks for continuing to be a contributor to our blog.