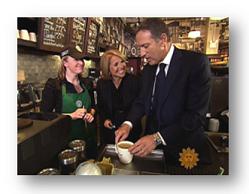 Starbucks CEO Howard Schultz has a new book out (Onward: How Starbucks Fought For Its Life Without Losing Its Soul), and is making the PR rounds.

The book tells the story that during Starbucks’ meteoric rise in the early 2000’s, the company lost its compass and forgot its brand essence.

In a recent interview with Katie Couric, he explained that “Growth became a strategy, as opposed to an outcome…(It) wasn't about quality, and more importantly, it wasn’t about the customer or the partner.”  And when he’s talking about partner, he’s talking about Starbucks employees.

This is an incredible admission on the part of a Wall Street scrutinized CEO, and I would make the case that Schultz is not alone in blaiming part of the problem on his company’s loss of focus.  Some radio CEOs might be quietly nodding their heads in agreement.  And while Schultz puts some of the blame on the economy, he explains the essence of Starbucks:

That’s an interesting take, and it speaks to that need to connect with the customer.  At CES in January, Paul and I were amazed and pleased about how companies like Ford, Verizon, and Time Warner were all singing out of the same hymnal when they all proclaimed that “It’s about the customer.”

And as every CEO knows, it is a minority of customers that generates the majority of the revenue (or ratings).  And it’s the same in pretty much every business on the NYSE.

So why then does radio often overlook, ignore, or even disdain some of its most rabid listeners?  Whether it's rudeness on request lines (or simply not bothering to answer them), poorly training talent who interface with the audience in person, or making fun of regular contest winners – calling them “Prize Pigs” – radio oftentimes doesn’t get it.

Every successful company has a name for its most enthusiastic customers.  For Starbucks, it’s “Super Regulars” – guys like me who are in and out of their stores 365 days a year. 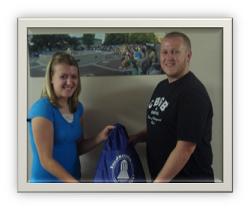 In radio, they’re “Prize Pigs” and station employees have traditionally mocked them, laughed at them, and turned the other way when they visit the station to pick up a prize.

The fact is these are the types of people that radio should be cultivating and learning more about.  How well connected are they on Facebook?  Do they recommend the station to friends and others?  How can we find more listeners who live and die with the station and the jocks?

When it comes to connecting with customer desires, radio is famous for asking the wrong questions.  We find out their favorite songs, the station that plays too many bad songs along with the good ones, and how the music rates on the hard/soft scale.

But rarely, if ever, do we ask about what type of relationship our audience wants with the station they listen to most, and how radio can meet those needs and desires.

That’s the essence of social media initiatives – not “making money on Facebook.”  Instead, the goal ought to be learning how to create, engender, and build better relationships with the local listeners who keep radio in business.  That's a major focus of our new Techsurvey 7, which is in the field right now. Yes, it's important to know how many listen to Pandora and how many own smartphones, but a key is to better understand the level of engagement they desire with radio, and how stations can best meet those needs.

Radio can learn a lot from CEOs like Howard Schultz and Alan Mulally.  Their companies are bigger than any broadcasting corporation, but their attention to the customer experience is what makes them successful.

Let’s retire the name “Prize Pigs” right here and right now, and dedicate our efforts to truly serving the listener – while she is still enthused enough about our brand to be a P1 or click “like” on our Facebook page.

Amen. An excellent article that deserve's a second and even third read.

Shame on me for ignoring the email from a listener asking why I didn't include a local basketball teams winning score. We only do the majors was what I was told - he knows those scores already and so does everyone else. It's those local scores that not everyone know. Would those extra 3 seconds of air-time hurt anyone?

Thanks for writing this...

Well said. I've long wondered why so many in radio have acted so 'superior' and above their listeners. Consumers, in general, have expressed great dissatisfaction at the lack of responsiveness but radio is such a highly personal medium. I was always amazed at some of the responses I got to answering emails, including those critical of something we did. If I just took 30-60 seconds to respond, I'd almost always get a response that read something like, "oh, My God- somebody actually READS our emails?" and thanks us for the response. Same with complaint calls- if we can get over the fact they're complaining and just listen for a minute or two and respond with respect and treat them as valued customers, they DO appreciate it and (speaking for myself and my stations) I could almost always turn them into a fan by the end of the phone call. All it takes is a little time and effort and the goodwill we generate will pay us back big-time.

Scott & J.J., thanks for the thoughtful comments. There are many program directors who truly care and take the time to respond to listener emails, calls, etc. We see it in focus groups all the time - a returned email from a jock, a courteous explanation of why we do what we do goes a long way toward making the feel respected and connected.

We appreciate you reading the blog.

Maybe I'm the exception to the rule, but I've never "looked down my nose" at the listeners who turn up on the winners list over and over. Those have always been the ones I would come out of my office to thank when they turned up at the reception desk to pick up their prize, because I see them as the most loyal of my listeners.

I've given many a station tour to so-called "prize pigs" over the years and they would be the ones who I'd make a special point to mail new bumper stickers (remember those?) to, because I could pretty much count on them being displayed. Usually, I'd send a couple ... one for the bumper, the other for their collection (you just KNOW they would have a collection of station "stuff").

Great article. Same concept, but updated for the modern age. If we don't remember that our stations are there for -- and because of -- listeners, and appreciate them, they will be tempted by the next format flip by a competitor. Let them know they are important to us, and they will be much more resistant to switching. I'd even go so far as to say they are the listeners who are likely to sit through songs they don't particularly like rather than tune away.

K.M., thanks for joining the conversation. You are right - these are the listeners who tell their friends about the station, sit through some of our less-than-great moments, and are even patient when the station errs by hiring or firing the wrong person.

Appreciate you reading the blog & taking the time to comment.

Thanks Fred for the focus. PPM draws people into the "reach" game when the billion dollar companies of the past decade are focused on the individual customer experience that is so good they want to share it with their family and friends.

For radio its about "listener obsession". If I continually do something for the listener that touches them and really matters then I will get the same action in return. The key is how many listeners I can activate to do something that matters. This action is measurable and valuable. If you are in the reach game you are not touching people in a way that will cause them to act.

Mike, extremely well put. Those Internet icons understand that it's about the customer experience. And if we can establish real relationships with these listeners, some of them will recommend us to others. If radio can marry its content with that Internet service attitude, well who knows what the business could morph into.

Thanks for taking the time to comment & read the blog. Truly appreciate your response.