Kurt Hanson, Paul Maloney, Jennifer Lane, John Gehron and the entire staff representing their company at RAIN in Las Vegas should be smiling. They put on a great show last week, well-attended, on time (pretty much), and very relevant to what’s happening in media and digital today.

Paul and I were in the room from start to finish, tweeting coverage that we hope some of you saw. Here’s a brief salvo from Kurt’s interview with CBS head honcho Dan Mason that typifies the fast moving, content-rich sessions (read from the bottom up): 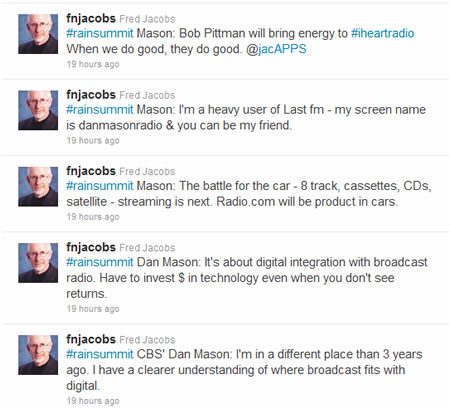 Twitter is a great tool for this kind of “reporting.”

While we enjoyed many sessions at RAIN, and were happy to participate on the mobile panel, one of the most compelling moments came at the end of the day. The session was called “The Future of Music,” and it was deftly moderated by TAG Strategic’s Ted Cohen.

As Ted reminded the room as the panelists took the stage, this last agenda item was the only thing standing in the way of 250 attendees enjoying cocktails. So the pressure was on to be compelling and attention-getting. 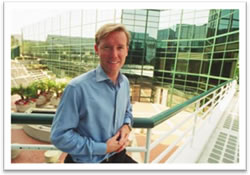 A running theme in this session is that the music industry is making it virtually impossible for pure play webcasters to financially survive – despite a shared goal to expose and promote music. (See – you thought it was just radio guys who felt this way.)

Ted rhetorically asked, “In the music business, is litigation a core revenue stream.” It was a good question, and the panelists freely talked about the fine lines that have to be adhered to in the streaming business. In fact, Robertson openly spoke about some of the lawsuits and legal issues he’s had along the way – and expects to have down the road.

He openly suggested that as good a job Pandora has done in aggregating subscribers, platforms, and avenues, it will never be a “major profit machine” because of expensive royalty rates. And Anu Kirk noted the difference between growing an audience in terrestrial and online radio; in the latter, the onerous rates work against any channel, network, or service.

Robertson also noted that broadcast radio has an advantage because of its inherent “marketing power” – using its own air to get the word out about its streaming assets.  Radio's cume - the ability to spread the word about streams, podcasts, mobile apps, Facebook pages - is still one of those secret weapons that many stations simply overlook or underplay.

“The Future of Music” painted a bleak but realistic future of the challenges that lie ahead for any pure-play Internet station that specializes in music. And it also underscored some of the inherent advantages that broadcast radio has as it plays both the on-air and online game.  (And then we had cocktails.)

Thanks to all at RAIN for putting on a quality conference. Next stop for Kurt and company: the Conclave and the NAB Radio Show in Chicago in September (their home market).  We'll see you there as well.