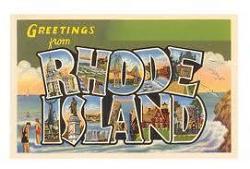 In his ongoing efforts to generate revenue on behalf of our radio clients, Paul Jacobs takes a short break from his busy schedule to opine about sales, advertising dollars, and a little geography lesson.

I was recently in a meeting with a general manager and he expressed happiness that radio revenue was growing in the market.  As a result, his station was making goal for the first time in a long time.  As we all know too well, those aren't words that we've heard very frequently over the past couple of years.

But it got me to thinking, why are we basing success on the growth of revenue for radio?  At around a 5% share of advertising revenues, isn't this akin to assessing the state of the U.S. economy by looking only at Rhode Island?

This is the central problem for radio revenue generation - we keep looking at the shallow end of the pool to judge success, while missing out on the ocean of opportunity in the media advertising world.

A white paper just released from Social Media Examiner highlights a survey made up of 3,300 marketers.  It shows exactly where marketers are shifting their dollars, and it's not to Rhode Island.  If you’ll permit me to use the U.S. map as my metaphor, it's more like "California" (Social Media), "Texas" (Email Marketing), and "Florida" (Blogs).

That's why we keep reading about huge revenue gains and inroads being made by Facebook, Google, Groupon, Pandora, and other media companies.  That's where the dollars are moving.

Why are marketers shifting their focus to digital channels like social media?  The top five reasons in the study are:

It’s hard to see how a sixty second radio commercial can satisfy those priorities.

While some radio companies are making the shift (and recent comments by Clear Channel's Bob Pittman about the urgency to make a substantial digital shift are noteworthy), when you walk into a radio station sales department today, it's not much different from 20 years ago.

Radio salespeople are focused on essentially the same revenue channels as before - major advertisers and agencies.  The language/metrics are the same - "commercials," "CPM," "ranker."  The competition is the same - other radio stations.  And the scorecard is familiar - Miller Kaplan.

Radio needs to get out of Rhode Island.  It's a nice state, but it’s the smallest slice of the pie.  For radio to really grow, it's going to come from the manufacture of more radio dollars from other pies - and other states.  As Gordon Borrell has preached for years, there are bigger dollars over the horizon – if radio is bold enough to truly compete for this business.

It's going to come from a significant reorganization of staffing, incentivization, priorities, goals, investment, and an honest re-definition of what advertising share we really need to go after.

“With respect to our friends in Rhode Island…?” Sorry, Paul, next time you want a metaphor for backwards thinking, stay away from The Ocean State where we are innovating. One example, WRNI was the first NPR News Station with an iPhone app. Respectfully, Joe O’Connor, GM, WRNI/Rhode Island Public Radio.

Joe, thanks for your comment. As someone who lives in Michigan I'm as sensitive as anyone when someone takes a shot at my state. But that's not the message we're trying to share - it's an analogy about size, not quality. Radio is too focused on a small share of revenue, while there is a much bigger "country" out there. No offense was intended here. And truthfully, the WRNI app was motivation for us to get into the app business. You are a trendsetter.

Regardless of the state "dynamics" :0, it's a great read and a excellent anology Paul. Just passed it along with multiple comments to my sales management and leadership team.

Thanks for the comment, Dave. There is so much revenue out there beyond radio's current share - we just need to expand the vision and see the entire "country," if you know what I mean.

I do...BTW, just saw the DVD of your "Goin Mobile"(finally) from Mike and Jaye's pre CRS session. Amazing stuff. 200 hours of shooting and the smartphone was never more than 6 inches away from their hands. (But it's just a fad, right?:)