Rock ‘n Roll All Night And Market Every Day 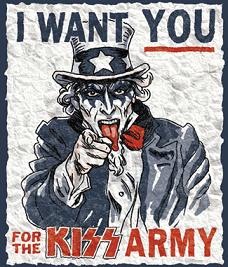 Behind the makeup, KISS is one incredible marketing machine, and in today’s post, Bill Jacobs takes a look at how some of their guiding principles apply to any brand.

It’s pretty amazing that a band that’s had just two Top 10 songs over a 35-year career has became a marketing juggernaut.  True, KISS has sold over 100,000,000 albums worldwide but they’ve probably made more money by licensing an astonishing 2,500 products (everything from coffins to credit cards to condoms).

Gene Simmons reportedly makes upwards of $100,000 for a speaking engagement (which means you shouldn’t expect to see him at an upcoming Jacobs Media Summit).  There’s really nothing quite like the KISS brand.

It’s all about marketing, pure and simple, and in 1998, KISS hired Michael Brandvold to build and manage their website.  Over the next seven years, Brandvold worked inside the world of KISS and knows more about the marketing of the band than anyone besides Simmons himself.

A recent article on Music Think Tank written by Brandvold lays out the “10 Lessons I Learned From KISS At Their School Of Marketing.”  Many relate to marketing radio, and I’ve pulled off some key points:

It’s All Branding – Brandvold admits that at times, even he has had issues with how KISS has become more of a brand than a band.  But he came to learn that the brand is what it’s all about.  As he explains, it was never “Family Jewels,” but “Gene Simmons’ Family Jewels.”  Everything needs to be branded.

Everything You Do Will Not Succeed – But don’t be afraid to try things.  In Brandvold’s experience, if you’ve got a content idea for your website, try it.  If your fans don’t get real excited, move onto something else.  We live in a world of short attention spans and your failures will be quickly forgotten.  But failures never stopped Simmons from trying to score points (and make money) on any number of ventures.

The Fan Is The Most Important Thing –Without your fans (P1s) and those thousands of die-hards in your database, where would you be?  Brandvold understands the importance of the KISS Army, something other brands would kill for.  The lesson – listen to what your fans want, and in this era of social media, it’s never been easier to tap the pulse of your listeners and engage them in the conversation.  Make them feel like a part of the process and feel included. 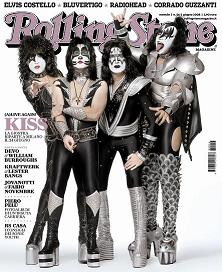 If You Don’t Ask For It, You Won’t Get It – From the KISS perspective, it’s always been about audacity.  That meant asking to be on the cover, to headline, and for more money.  For your morning show that means pushing hard to get an interview you might not get otherwise.  For a concert promotion, it means asking for more tickets than you might normally get along with an acoustic show at the station.  For sales, it means asking for the highest rate possible.  For social media, that means asking your followers to repost something you’ve written or to recruit their friends to “like” you.  The one truism – if you don’t ask, it’s pretty certain you won’t get what you want.

Bonus Lesson – They Aren’t Afraid To Change Their Minds – The band wound up doing something they never thought possible: marketing to kids.  They realized that grabbing kids and bringing them into the fold at a young age could create a new generation of fans (and sell more merchandise).  What are the things your station would never do that might open up new avenues?  For many Classic Rock stations, it could be using Facebook or establishing a text messaging platform.  And now the fastest growing segment on Facebook is older people.

When you think about it, there are many parallels between KISS, their brand, their Army, and their marketing.  Brandvold’s experience might get you thinking about how you can take your station into “super-brand” status.  KISS has outlasted hundreds of ‘70s bands, demonstrating the importance of the brand experience.

Thanks so much for posting my article!

Thanks for writing it. We enjoyed it immensely and saw some strong parallels to branding radio. All the best to you & thanks for commenting.