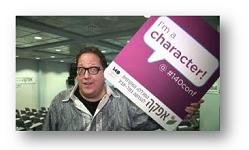 As many readers of this blog know, I was fortunate to be one of the speakers at the “140 Characters Conference” held in downtown Detroit last fall.  Since that time, it has been a thrill to connect with Jeff Pulver and the entire 140 Characters community via Twitter.

The more time I spend on Twitter, the greater value I derive.  Many people are surprised when I tell them this, but that’s because many think about Twitter as a way to follow celebrities.

Yes, for millions, that’s what Twitter is all about.  But for me, Twitter is a way to connect with some true thought leaders and very interesting people.  That’s where I’ve met Stephen Clark and the #backchannel community, as well as nationally known social media folks like Chris Brogan (@chrisbrogan) as well as local professor and media maven Jason Schmitt (@jason_schmitt).  Resources gleaned from Twitter are probably the genesis of at least a quarter of these blog posts.

But the other benefit of Twitter is learning how to communicate in a tight space.  At the “140 Characters Conference,” most talks are limited to 10 minutes, and Jeff discourages PowerPoint.  So there you are, on stage, in real time, telling your story.  It is a challenge to effectively make your points and engage an audience in that setting and in that tight time frame.

That’s actually emblematic of how Twitter works.  You have just 140 characters to say something compelling, clever, meaty, and/or viral.  In radio, we frequently focus on “water cooler talk” and how to create content that people will be talking about later in the day.  Well on Twitter, you can see the fruits of your labor in “retweets" and mentions.  Either your thoughts are clear, concise, provocative, thoughtful, and helpful – or they aren’t.

And in speaking with our new digital/social strategist, Lori Lewis, we've talked about the obvious parallels between effectively communicating on Twitter and thriving on the air in a PPM market.  The audience’s window of tolerance is shrinking.  Their patience level is diminishing.  They just don’t have the time to listen to a DJ struggle or ramble during a break or a bit, especially if it's unprepared. 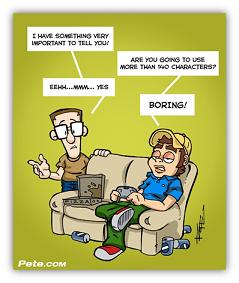 Refining content and communication for newly tuned digital eyes and ears is an ongoing challenge for creators in every medium.  In radio, PPM – while often criticized for subduing personality – may turn out to be a sort of blessing because of its pressures to refine and condense while staying compelling.

Arbitron says that success in PPM has more to do with your brand than it does in applying formatic tactics.  It’s not about making breaks :30 or less.  It is about saying something smart, insightful, and interesting in a short amount of time and space.

Some people find Twitter confining.  I find it invigorating and challenging.  Unlike this blog where there are no space limitations (just your potential boredom), in Twitter I am forced to write it, edit it, read it, edit it again, and work hard to make every tweet count.  In many ways, great tweets are great teases, especially if they're designed to get you to click on a link or join in on the conversation.

That’s a good exercise for any DJ or corporate communicator.  On a short field, can you score in the Red Zone?

Twitter is great practice for all your communication, on the air and off. If you can connect on Twitter, you have the ability to connect anywhere.

How does 140 characters look when typed out? Can you say what you need in this space? It's 9 seconds! This response is just 140 characters.

Jay, it wasn't meant as a direct translation of 140 characters to seconds, but an idea of the need to communicate concisely. 140 characters

David Moore turned me onto the whole "edit yourself" thing a long time ago; becuase I needed it! It was important then and it's even more important now. (Recommended reading http://amzn.to/edityourself)

To paraphrase the old jazz saying, it's not about how many words you can say, it's about using the right words. #126characters

Gregg, appreciate the response & comment. Thanks for reading our blog.