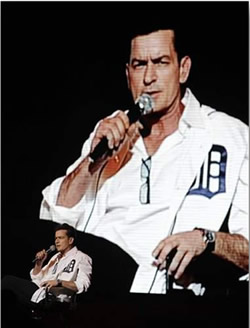 What can we learn from Charlie Sheen’s “Violent Torpedo of Truth” tour, which of course opened here in Detroit on Saturday night?

First, celebrity will only take you so far.  Sheen brought his entourage to the Fox Theater and it didn’t take long for fans (or ex-fans) to start walking out.  For all the reasons you can imagine, the show sold out quickly because people were curious.  However, that appeal ran out real quickly. Simply put, every radio programmer and DJ knows you can’t mail it in and survive for too long.  Sheen hopefully learned that lesson after this Detroit debacle and will course-correct for future gigs.

Second, it’s about content.  The “show” was clearly not well-designed for a live theater.  And even a TMZ celeb, hot women, and mediocre hip-hop couldn’t save this thing.  WRIF’s Drew Lane was quoted in the Free Press and probably said it all, one performer to another, “"People were upset, but I don't think they knew what to expect. He's a movie star, not a stand-up comic.”

Third, choose your first big move wisely.  When asked why Detroit was selected for opening night, publicist Larry Solters said, “Why not?”  Well, if you think Detroit residents will put up with lousy entertainment (exception: the Detroit Lions), think again.  This is a town with a heart, filled with lots of great fans who love to laugh and participate.  But they have great BS Detectors and can smell a rat all the way down Woodward.

Fourth, local radio ruled.  The amazing thing about this event is that Sheen and his publicists pretty much had their pick of media to promote the show.  And what did they choose?  Not Pandora, not Facebook, not Sirius/XM.  They chose local radio – specifically Mojo In The Morning on Channel 95.5 and the Drew & Mike Show on WRIF. While Sheen's appearances on these morning shows got botched (big surprise), the fact is that hometown radio shows were the chosen conduit – something that each of those station’s sales staffs should be trumpeting this morning – as should any AE working in any broadcast radio station in the country. Nothing works like local radio.

And finally, the post-PR on the event was also dominated by Detroiters and their great morning shows.  In the Fox 2 news coverage, you’ll see and hear Drew Lane of the Drew & Mike Show, not to mention his quotes in the Detroit Free Press.

For Sheen, this “Night In Detroit” could turn “winning” into “losing” and mark the beginning of the end of his 15 minutes of post “Two and a Half Men” stardom.  For local radio, it was a big win, and another reminder that when you need to successfully reach people where they live, there is still no substitute.

We were contacted by Nadja Geipert, author of "Eye of the Storm," a blog that appears in Psychology Today.  Here's her "take" on what's going on in the mind of Charlie Sheen.

Can Charlie Sheen Teach Us Somethign About Love?

Too bad for Detroit that his first show experiment had to be here. He learned from that, unfortunately at Detroits' expense once again - and "perfected" his act for his second show in Chicago. We were all hoping he'd lay his second egg and thus cancellation of the tour. Just makes Detroit look bad regardless, which just doesn't help our already suffering national image...

You're right, Mike. Sheen should be thanking Detroit - not trashing it. He used Motown as a beta test instead of putting together a great show for opening night. Thanks for the comment.

This event was also a perfect match for local radio... It was a national event coming to their city. So many "one liner" possibilities... that it was fun! Everybody was talking about the event. And who didn't hear people saying "Winning" about 100 times daily. And of course, the majority of ticket buyers were local.