JacoBlog - Jacobs Media's Blog: “I Don’t Want To Be Around Radio People”

“I Don’t Want To Be Around Radio People”

And with that statement, Russ Hill, President of Ownd Media Group, elicited “oohs,” “aahs,” and even a little vitriol from the packed crowds at Radio Ink’s Convergence conference.

I tweeted Hill’s “I don’t want to be around radio people” comment, and some responded angrily and defensively.  But there’s clearly a context to what he’s saying when it comes to conventions and learning – and it’s a theme that we’ve mentioned before in this blog. 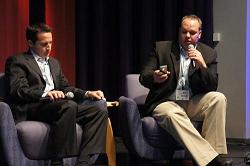 A former Bonneville PD, Hill (pictured left) runs Ownd Media Group, a social media/digital consulting firm.  And now that he’s officially out of broadcast radio, there was nothing holding him back at “Are You Still Hiring Like It’s 1999?” hosted by Bonneville’s digital head, Mark Preston (pictured right).

But here’s the context – Hill was exhorting the audience at Convergence to get away from typical radio conventions – in fact, he urged them not to attend them – because it’s the same people talking about the same things.  He indicated that many radio PDs (along with CEOs) aren’t even using Facebook.

In Hill’s mind, it’s about being around “digital and social people,” where the real action is taking place.  And he reinforced these comments by saying that more radio professionals should be living and dying by their digital progress and results.

Hill’s comments were laced with cynicism, but his message was clear – radio people need to get out of their comfort zones and learn about the digital world by hanging with people who are successful in this space.  Going to radio-centric conferences and simply talking about PPM, music scheduling, and jock coaching isn’t going to further radio’s cause as it attempts to make the transition to the digital mainstream.

In defense of radio conferences, they’ve come a long way in recent years.  The NAB and RAB have made a concerted effort to integrate digital sessions into their agenda, and this year’s convention in Chicago will be no different.  And many, many people in radio have made the transition to the digital space that is "immigrant" to most of us, rather than "native."

And some events like Convergence, RAIN, Arbitron’s Client Conference, and our Summits focus on both sides of the spectrum – broadcast and digital.  Hill’s point, however, is more about who’s in the room – and there’s no question that the radio industry needs to be more inclusive to the key players in digital media.

That’s where radio can do better and needs to attract more digital superstars, while continuing to boldly schedule sessions that broadcasters may not agree with, but are necessary to see and understand. 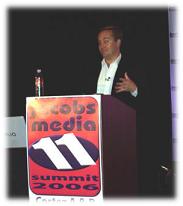 In past years, Summit speakers have featured the likes of media/marketing/digital gurus, Tom Asacker, Ben McConnell, and Jason Calacanis (pictured).  And believe me, their messages haven’t always been comforting to our attendees.  But that mind-stretching, change-inducing content is precisely what radio needs in order to advance, grow, and thrive.

Paul and I are both appreciative of Radio Ink’s Eric Rhoads for the opportunity to moderate panels at both Convergence and the Radio Tech Summit.  The entire Radio Ink staff deserves a great deal of credit for their hard work in putting this multi-day event together.

They were uniformly great sessions, and whether Hill believes it or not, were exactly what is needed.  Hill's style might have rubbed some people the wrong way, but his message wasn't lost on us.

Right you are, and that tide is turning. Here's a quote from the RAB's Jeff Haley about the importance of digital revenue in last quarter's results for radio: "The double-digit gain in radio’s digital sector reflects advertisers’ growing interest in tapping the power of exciting interactive capabilities in providing a return path to enhance product and brand promotion and increase sales.” That time is NOW.

Thanks for writing, Danny.

Its not what you say its how you say it something Russ should know since he was in programming. Agreed! we have to expand our knowledge base and constantly learn and understand what our clients want. I would add attending a client's industry function wouldn't hurt either.

Thanks, Angie. And Russ certainly stirred it up at Convergence. My guess is that it was intentional, but whatever the case, it worked.

Appreciate you reading our blog & taking the time to participate.

It's a shame that so many at the corporate level are used to immediate returns. They don't see a lot of money from streaming, and why should they; and yet that and a promotional website is how they define digital. The companies investing in unique, compelling digital content, using their terrestrial signal and local talent to promote it, WILL be around to see the dividends. This is NOT like a one day sale!

Great line, Jim. The same investment commitment that broadcasters committed to buying land, erecting towers, buying transmitters, and staffing up several decades ago is being spent by media and technology companies. Radio has so many inherent assets but that commitment to digital is square one.

Thanks for taking the time to read our blog & participate in the conversation.