« In Memory Of | Main | The Social Media Experience » 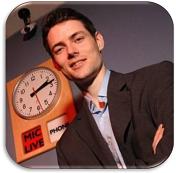 James is the managing director of Media UK and uses the interesting descriptor of “radio futurologist.”  After watching his presentation, it’s an apt title for what James is about.

The essence of his talk was that around the globe, the radio industry in different countries comes together for their own common good.  As we have discussed before, American radio has moments like these, but they are typically isolated to weather emergencies like what is occurring in Joplin, Missouri.

When there’s a real crisis, broadcast companies put down their swords and truly lend a hand.  When there are sunny skies, however, it’s back to dog eat dog.

And it’s to radio’s detriment.  James argued that radio’s destiny is a hybrid future – a combination of traditional broadcasting, digital, and other platforms that will blend to offer the consumer a better experience.  Ratings data from around the world confirmed his notion – depending on the format and the audience, the makeup of listening outlets and channels can vary a great deal.

But it all starts with the “one voice” concept.  James showed a video of the digital radio rollout in Australia.  It was bigger than life, and all the key stations and broadcasters united to make this event bigger than life.  It garnered mass media coverage and made Australian radio look exciting, modern, and connected to the tech revolution.

He showed a demo of the “UK Radio Player” – an innovative device where all stations in the United Kingdom – commercial and public – have come together to create a slick, useful streaming product that is beneficial, convenient, and makes it easy for the consumer to enjoy all that radio offers in the UK.  And they position it as “UK Radio in one place.”

A big part of James’ theory relates to how radio is positioned to other media.  His belief is that in order to get the most positive industry message to journalists and other key news media players, the radio industry needs to speak in one voice.

Now we know the difficulty of this here in the U.S.  The various broadcasters have their moments – such as when they serve on the NAB or RAB boards.  But too often, each company goes its own way, developing its own technologies, and rarely presenting a unified front to the media.  It’s like trying to bring Shias, Sunnis, and Kurds to the table – asking them to put their differences aside to consider a broader future.

James showed a commercial for London’s Capital FM that makes the station – and RADIO – look bigger than life.

As he reminded the crowd, “A growing share of a shrinking market may look impressive to investors; but a growing market is ultimately more important to the long-term health of an industry.”

Have all the "bean-counter suits" who really own our biggest consolidators heard this?

And it looks like the UK Radio player is off to a great start -- after just 8 weeks it has nearly 6 million unique listeners in a month:

Clearly it looks like the combination of aggregation and cooperation is a smashing success across the pond.