There's some big news this week as Groupon and Live Nation are launching a new online ticket deal as we head into another challenging concert season.  We all know how fickle Americans have become when it comes to picking and choosing a diminishing number of concerts to see each year.

And as CD sales plummet, and aren’t replaced by enough mp3 sales, concert performance and merch sales become even more critical for artists and bands. 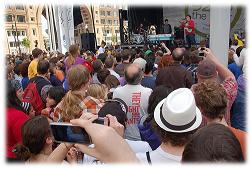 It’s quite a list, and oftentimes, stations receive no advertising revenue for their efforts.  It’s about showcasing the bands the audience loves, and supporting the station’s format brand equity.

What more does radio need to do to prove its value in the concert arena?

And now Groupon swoops in and cuts this deal with Live Nation to ostensibly offer email coupon deals for audiences across the country.

Radio should be in on this action – because of its cume, artist focus, databases (that should have the ability to filter fans of various artists), coupon experience, and strength of local knowledge.

The digital world is comprised of synergies, partnerships, and affiliations.  But too often, radio finds itself as the one player that never seems to get picked.  It’s time to grab a bat, step up, get noticed, and make a difference.

This is where the industry’s trade associations need to represent the medium to other key players.  We have a big radio convention coming up in September in a major market.  Radio needs to look big in Chicago, bringing in some of the movers and shakers from other industries where partnerships and associations would be welcome and mutually beneficial.

Conversely, radio as an industry needs presence at conferences and events that are “outside radio.”

When it comes to concert support, radio has a great resume: personalities that matter, production expertise, and street sales teams are all part of the asset package that radio provides year after year.

And yet, radio is often overlooked, taken for granted, or simply thought of as old school in a new media world.

Radio needs to be in this mix.  We have long talked about an industry SWOT initiative.  Let’s map out our strengths and opportunities.  Let’s looks for ways to combine our inherent assets and our legacy brands to sound more contemporary, attract more digital dollars, and better connect with key media partners.

It’s time to truly act like the Concert Authority again.

This is a sales failure, not a PR failure.

"...And now Groupon swoops in and cuts this deal..." says it all. CBS or Clear Channel could have "cut this deal" and offered everything Groupon did along with all of the attributes you outlined - they just didn't.

Was there an honest dialogue between the top radio companies and Live Nation? Apparently not. Does Live Nation care about radio's traditional advantages as much as direct email coupon deals? Apparently not. Did radio know this? Apparently not. Would Live Nation have taken a meeting with CC or CBS or Katz to discuss a program to marry their traditional business with something like the Groupon deal? Probably so. Had the two companies been head to head competitors for this deal, could radio have offered everything Groupon did and a lot that they couldn't? Definitely so.

Radio should be embarrassed - but the solution won't come from trade associations - radio companies have to do the work themselves. They should hire some real business development pros from other media, watch, learn and grow.

This is no country for old men...

Bob, thanks so much for the thoughtful comment. I believe that Irving Azoff and others at Live Nation appreciate how radio has historically made strong contributions to the concert business.

But your points about radio's conversations - or lack thereof - are precisely the questions I'm asking. For too long, the industry has been able to "think inside the bun" as it were - but the days of radio being an industry apart from partnerships are long past.

We truly need to have a broader, collaborative view as an industry. There are partnerships and spots where radio would make a great team mate, but there needs to be proactivity and vision.

Thanks again for reading our blog and commenting.

I wonder how much the role of data, and Groupon's willingness to share it, played in this deal.

Being able to mine data, and a willingness to share and contextualize it, is a powerful business driver.

Radio - New business model. No more being the middleman. Stop selling the audience to business. Partner with business to serve the audience.

The business model is significantly different when there is skin in the game.

Many broadcasters continue to allow the Arbitron paradigm to hold this business hostage while billion dollar Internet companies are being built on one thing - customer obsession (our listeners).

To borrow a phrase from Internet start-up entrepreneurs...it's time to "disrupt".

Jack & Mike, great to hear from both of you on this topic.

Jack, I'm sure that the data mining is one of the positives of a Groupon deal. Live Nation "gets" the power of knowing more about its concert-goers and web companies like Groupon play into that.

Mike, you hit the nail on the head. When Live Nation can partner up with Groupon, many of the other media are bypassed. They will still need advertising (for now) to get the word out because not everyone has Groupon and its subscribers lean heavily female. But the essence of the equation is very clear and you pointed it out.

I believe you can serve customers and still compete in Arbitron, but it requires a commitment to listeners in ways that radio has not typically behaved.

Appreciate you both reading our blog and taking the time to comment.

Thanks for the feedback. I thinks it comes down to this -

When you are obsessed with serving the customer (listener)...Arbitron happens!

So cute! I already like you on FB and also get your posts on Google Reader. :)