During the past several weeks, Jacobs Media’s social media maven, Lori Lewis, has been working her way through a series of posts called B-A-L-A-N-C-E.  Today’s post is the last letter - “E” – and it’s about the need to Establish, and then maintain your credibility in the community.

I’m sure you’ve heard the saying “Build your network before you need it.” With social media, it’s about building your community before you need it (or it needs you). To establish yourself in any community, you must first distinguish how you can serve. Once that has been determined, it’s then possible to develop a social media communication strategy to maintain your integrity. 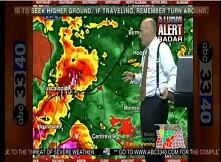 There is no finer example in the display this element of B-A-L-A-N-C-E than in James Spann. In case you don’t know, he is the chief meteorologist for ABC 33/40 TV in Birmingham, Alabama, who stayed on the air and online with the brave folks of his state during the devastating tornadoes earlier this year.

Spann turned his Facebook and Twitter streams into a real-time way to serve his community. But had he not been established as a viable, believable, and credible market fixture, his effectiveness in using these tools during this crisis would have not been anywhere near as powerful.  Spann is an honorable example of a memorable brand.

And he’s a great story about proving what it takes to maintain credibility after first establishing a strong community presence. Too often, talent has a tendency to jump in and start tweeting, posting, and making social media “noise” without first establishing presence, reputation, and audience expectations. 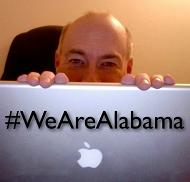 During the Alabama storms, Spann was like a one-man weather service. Before the weather turned deadly and then during the subsequent destruction, he stayed live on ABC 33/40 and radio, and UStream, and tracked the storms by keeping an eye on his laptop, too. When DirecTV customers lost their satellite service, they were able to stay informed via Spann’s UStream channel.

The key to Spann’s success wasn't just about what he did during this weather disaster - it dates back several years. Spann truly “built his community before he needed it.” He spent years making listeners comfortable with his presence and personality, while not pushing himself into theirs.  Spann speaks in schools, and spends time visiting with senior adult groups, civic clubs, and other community groups.  So in the middle of the crisis, he was a familiar, comfortable source that Alabamans trusted. It all starts with that established presence.

Spann clearly has a “servant’s heart,” and no doubt saved lives through his use of social communication. You can get a sense for how he connected with his audience during the storms – and how they stayed connected with him: 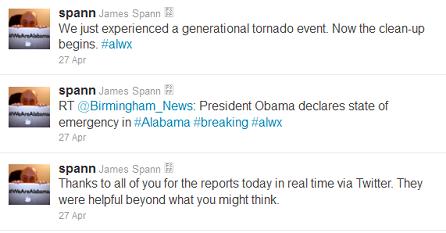 On Twitter, Spann had so many incoming tweets that he created a couple of different hashtags, including #WeAreAlabama so the community could track the conversation in a more organized way.

Spann’s heroics point to the importance of a real conversation with his audience, in times of tragedy, but on “slow news days,” too. He tries to follow everyone that follows him on Twitter (unless it’s spam) and he stays current on Facebook. He continues to use his Twitter and Facebook streams as a way to serve the needs of the people of Alabama.

All the social media tools in use now provide incredible potential for talent to connect with their listeners and viewers. But it’s the hard work that it takes to establish reputation, credibility, and trust that truly unlocks the keys to social media effectiveness.

Please leave your comments below, and if you’d like to read Lori’s earlier “B-A-L-A-N-C-E” posts: