The not-so-good news last week out of Detroit was that Ford’s J.D. Power ratings dropped the automaker to 23rd on the list of automotive brands for IQS rankings – Initial Quality Ratings.

For Ford – the American automaker that did not take the bailout money – this was a pail of ice water because in 2010, Ford was sitting pretty at #5.

What drove this precipitous drop?  It had very little to do with the way the car runs – its handling, safety, stability, braking.  It has everything to do with problems with its electronic features, mainly SYNC.  Drivers registered 116 complaints for every 100 vehicles, much of them having to do with issues surrounding MyFord and MyLincoln Touch systems.

I get it, because I’ve experienced similar issues with my 2011 Ford Edge.  (Of course, I lease a vehicle called “The Edge.”) SYNC was seriously the main reason why I chose the Edge, and I’ve had my share of problems with it, ranging from outages to volume control problems to just plain inconsistencies.

According to J.D. Power, SYNC is simply too complicated for many consumers.  Truth be told, my salesperson didn’t understand it very well either.  So that first weekend, I dragged my laptop into the garage, inserted the SYNC DVD, and sat through for 90 minutes watching every chapter. 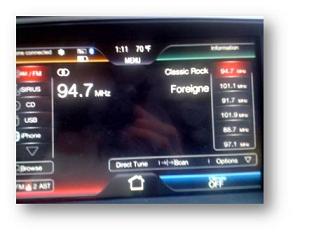 Clearly, SYNC is cool and amazing, packed with more options than most consumers can imagine.  Look at my desktop in this picture.  Down the left hand side, you can see my array of choices.  But there’s a lot of stuff on this screen – and it’s only a portion of the different views I have available, including services, climate, information, and of course, the phone.

And that’s a big part of the problem.  It’s confusing for someone who just wants to jump in their car and listen to the Classic Rock station in town or connect their smartphone to listen to the audio from a favorite app.

You get the feeling that Ford engineers weren’t thinking CX – the Customer Experience – when they loaded SYNC with just about every feature, option, bell, and whistle imaginable.  And that’s the problem with many consumer electronic innovations – whether it’s SYNC or the remote control that came with your plasma TV.  Too often, engineers trump designers and researchers.

For broadcast radio, systems like Ford SYNC and Toyota Entune need work.  But they’re going to get better, easier, and more intuitive.  Ford is addressing many of the flaws that led to their “bad book.”  And you can bet that consumers are looking for these options when they hit the showrooms.

Techsurvey 7 asked about systems like SYNC, and we found out that nearly one in ten of our core radio sample already has a vehicle like mine.  And their impact on radio listening could be a problem.  We asked these respondents if these high-tech entertainment systems had affected AM/FM listening.  And one-fifth indicated they are spending less time with local broadcast stations. 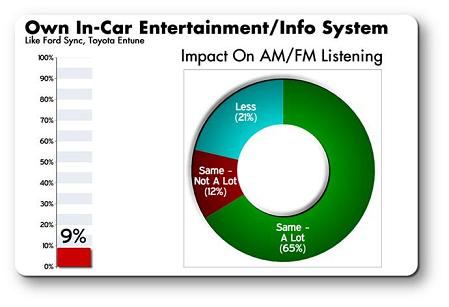 Radio’s entitlement in cars is rapidly eroding.  As more and more consumers buy and lease vehicles that are loaded with options, and as the automakers pay attention to their complaints and suggestions, you can bet that down the road, the challenge will grow.

Our apps division – jacAPPS – is now involved with research before we build apps, and usability testing after the fact for just this reason.  Our experience with ethnographic research tells us that looking at content and innovation from the view of the end-user is the secret to creating and producing great products.

Ford will figure this out – if they already haven’t started dumbing SYNC down to be congruent with consumer habits and tendencies.

Look at your station’s website, your Facebook page, and your app, and consider it from the consumer’s point of view.

It’s all about CX.

I clicked on your link: Our experience with ethnographic research; but I failed to see the targeted information due to the additional clutter.

I think it boils down to content. Good content will always win out. Technology exposes the consumer to different content. Now, more than ever, what you say MUST be compelling.

Who created this Operating System for Ford?

"The system consists of applications and user interfaces developed by Ford and third-party developers that run on the Microsoft Windows Embedded Automotive operating system."

My suggestion to Ford? iOS.

Yeah, Danny, but the stakes are now higher in cars. Thanks for the comment and for reading our blog.

John, when you get used to a product like the iPhone or iPad, it is a bit of an adjustment to cope with a technology that has great promise, but just isn't reliable all the time. Ford has the right idea, but clearly the execution and the consumer friendliness isn't there yet.