Stern’s Weiner: A Lesson in Treatment

Our resident personality coach and morning radio fan, Keith Cunningham, just about got Weinered-out last week.  Here are some thoughts about how any show can use smart treatment strategies to be just like Howard.

While he may be further out of the media limelight these days, Howard Stern still knows how to stir it up and make lots of noise.

You may have heard a Stern crew member, Benjy Bronk, invaded Anthony Weiner’s press conferences and asked obnoxious questions.  Of course, it made national news and turned into a story of its own.

While disrupting press conferences and generating controveries aren’t new tactics for Stern, there is a lesson here that applies for all shows – and it’s a lesson in treatment.

Everyone covers the big stories, so it’s about how shows talk about them and where they take it that makes the difference.  Is your show’s treatment unique and does it crack through the competitive noise?

Let’s look at two recent stories that were on the tips-of-the-tongues for shows nationwide.

Anthony Weiner:  Most brands sounded similar while rattling off their versions of Weiner headlines, double entendres (too easy), and jokes, or asking questions like – Is sexting cheating? or Should his wife stay with him?

That’s treatment that probably covered the story, but it was also predictable and disposable – it’s what everyone from morning radio to cable news was doing.

Now let’s shift gears to American Idol.  When it comes to treatment of that show, it’s a lot of the same old same old, season after season, playing clips from the previous night, agreeing/disagreeing with and mocking the judges, offering predictions of who will win.

Treatment can play a big role here and be a real difference maker.

The best, most compelling treatment and personalities eventually find their way to the top.  Here’s a three-step progress for fine-tuning treatment on your show: 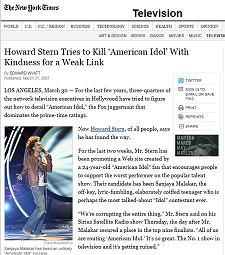 While it’s easy to use Howard Stern as an example because he has a team of talented pros, many resources, and the ability to wing it and still be hilarious, that’s neither an excuse nor the point of this post.

The Stern show plays clips from Idol like everyone else and they very likely told Weiner jokes and asked many of the same moral questions other shows did.

But they don’t stop with the predictable, they build from there … just ask Anthony Weiner.  And BTW – remember when Stern got a ton of press for trying to KILL American Idol by asking everyone to vote for Sanjaya?  That’s great treatment, too, and the kind of down-the-list treatment that often breaks through.

Try it for yourself.

Love those! I enjoy following your posts on facebook and rss!