The Fall Of RIM

Imagine the frustration and humiliation of being a market leader in an industry that is exploding – only to lose your dominance and even your respect.

Ask Rupert Murdoch how he feels about the demise of MySpace at a time when social media has become a dominant part of the culture.

And now Research in Motion finds itself in the same boat in the mobile space.  It wasn’t that long ago that seemingly every business person – including most CEOs – relied on their BlackBerrys, swore by them, and became totally addicted to them.  The term “CrackBerry” symbolized the hypnotic pull of smartphones, and Research In Motion ruled the roost.

Until the iPhone came along.

And we now know the rest of the story.  In the first quarter of this year, Apple sold more than 18 million iPhones in a marketplace where many analysts estimate a 50%+ increase this year.  In fact, research firm IDC pegs smartphone sales growth at 55%.

In the meantime, BlackBerry sales continue to lag, sparking layoffs, streamlining, and all those other words that you don’t want to hear from a company that was once the big dog.  RIM profits fell nearly 10% in that same quarter due to disappointing sales.

It gets worse.  The investment community is finally onto RIM's problems.  Its sixth largest investor, Jarislowsky Fraser Limited, announced it was paring back its stake by 50% or more.  As Stephen Jarislowsky told Bloomberg, " We are on the way out."

We knew – and those of you who participated in Techsurvey 7 (and their earlier editions) saw this coming, too.

In this fluid, crazy, fast-moving world of technology that is sparking a sea change in the basic ways in which people communicate with each other, it is our jobs – yours and mine – to try to know what’s coming.

As it relates to smartphones and apps, our design team at jacAPPS needs to know where it’s going before it gets there.  And as media professionals assigned with developing our brands' tech strategies, you need to be sure you’re attuned with your consumers,and understand what platforms and brands matter to them.  Otherwise, you can make very costly mistakes at a time when every dollar counts.

In the smartphone market, it’s about passion, utility, and loyalty.  (If that sounds like radio, you’re thinking along the same lines.)  We saw hard evidence in this year’s study that Apple (and Android) have all three assets, whereas BlackBerry lacks them all.

Consider that on average, consumers replace their cell phones about every 18 months – and most of us have a pretty good idea of what’s coming next.  For Apple, customer loyalty is at the top of the heap; for BlackBerry, its current customers are headed to Apple and Android, as you can see on the chart below: 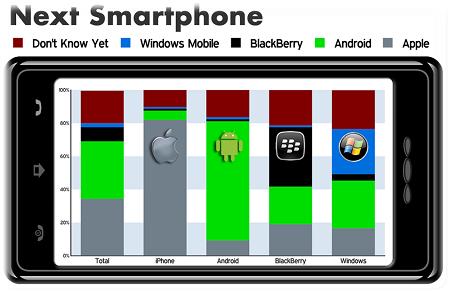 More than 80% of iPhone owners are staying with that brand next time – for RIM, it’s a grim story.

But as mentioned, your smartphone isn’t just a device that does a lot of stuff.  We’ve learned in research from “Goin’ Mobile” to our Tech Surveys that your phone is a reflection of who you are.  Smartphones make a statement about their owners, and some – like Apple – evoke passion with a capital “P.”  BlackBerry owners, as the chart below clearly shows, are much more lukewarm with their praise. 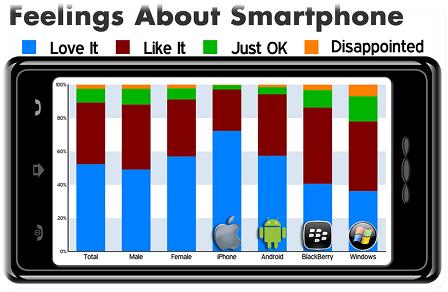 All that blue for iPhone translates to “love.”  And that’s a big driver in this marketplace.

But RIM’s ultimate downfall is in the world of apps.  Somehow, while BlackBerry owners were busy firing off emails and texts, the Apple team conceived the “App Store.”  And the different experience between platforms today suggests that RIM’s inability to comprehend the importance of apps is a big reason why they find themselves on the mat.

From Techsurvey 7, the number of apps that smartphone owners download differs greatly by device.  Apple owners – iPads, iPhones, and iPod Touch devices – are more likely to have more than 40 apps.  Compare that to BlackBerry customers, about half of whom have fewer than 10 apps. 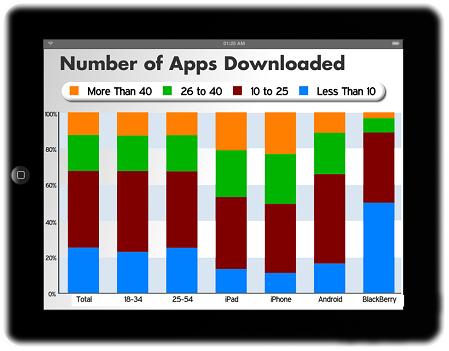 Somehow a major player like RIM missed the app phenomenon, assuming it somehow wasn’t of importance to consumers.  But you don’t have to be in the dark because basic research among your own database members – the same ones you send “eBlasts” to every week - can open the doors of your understanding, and provide guidance for your fiscal and strategic decision making.

As they used to say on The X-Files, “The truth is out there.”

You just have to ask the right questions.

As a loyal Apple fan it'd take a lot for me to be enticed elsewhere (or a big mistake by Apple).

The rivalry between Apple and Android is a bit like the competition between English football's Manchester United and Chelsea, fans with vast cultural differences where the concept of switching allegiance is totally alien.

Therefore I suppose choosing Blackberry is a bit supporting Tottenham Hotspur - you don't mind doing it whilst they're doing well. But you've always got a proper team to fall back on.

Seriously though the lack of loyalty to the Blackberry surprises me as people in the UK keep telling me it's the future.

Is there a specific target age market in the US where Blackberry has lost touch or is it general and across the board decline?

Its amazingly simple - Blackberry's are great for e-mail, but they suck at everything else. And everything else is what's drawing people to smartphones.

RIMs R+D just isn't getting it done. Its not just apps - they still haven't come up with a decent web browser or touch screen. I have an old one, am shopping for a new smartphone and am not even considering a Blackberry. I love their OS and dread learning a new one and converting to touchscreen typing, but iPhones and Androids are just light years ahead in what they can do.

Anthony, in the US, it is about apps. It has less to do with age demographics, and perhaps more to do with who you are and what you do. There are many business people who hang onto their BlackBerry devices. But for most consumers, it's another story.

There's a status symbol aspect to smartphones - and Apple and Android have done the best job creating cache for their brands.

Thanks for the comment and the international perspective. And I loved the soccer analogy.

Bob, thanks for the view from the BlackBerry camp. And with iPhone in particular, you will not have a problem "getting used" to it. These are fun, intuitive devices that captivate and amaze. Enjoy it.