JacoBlog - Jacobs Media's Blog: The Pen Is Mightier Than The Source Code

The Pen Is Mightier Than The Source Code

We have discussed the rapid ascent of Groupon in this blog a lot this year.  Our new Techsurvey 7, conducted among 70+ rock-formatted stations, netting nearly 21,000 respondents covered a lot of digital ground this year.

And we devoted some questionnaire space to eCoupon sites like Groupon and Living Social.  The results among these rockers (nearly six in ten of whom are men) are nothing short of spectacular. 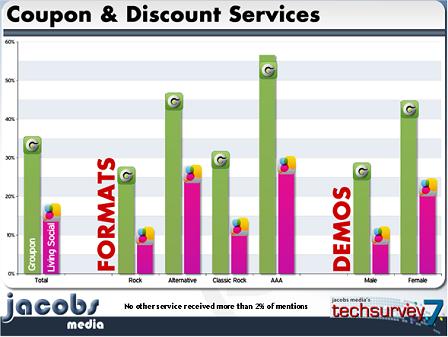 When more than one-third of our sample are receiving Groupon emails, while nearly a fifth subscribe to Living Social, there's little question about where the proverbial puck is moving.  While women are major drivers here, you can see that the appeal of these eCoupon programs is reaching mass appeal.

So, what’s driving Groupon – just the lure of great email deals and discounts – or is there more to it than that?

To hear it from the inside of Groupon’s headquarters in Chicago (of course Groupon has Midwest roots), there are already knockoff companies, trying to replicate the original’s success.  But as The New York Times recently reported, “...words will save Groupon.  Many more words.  Mere words.”

Recently, my Groupon deal was for a local video-transfer company in a Detroit suburb.  I don’t know about you, but it’s one thing to wax poetic about a restaurant or even a spa experience.  But a video-transfer services company?

Here’s how it looked in my Groupon email:

Like an old pair of sweatpants, VHS tapes can become too worn and sweaty to work properly. Turn your ratty tapes into crystal-clear DVD memories with today's Groupon: for $35, get $75 worth of video-transfer services at n-code in Wixom.

The video sages at n-code spin ancient technologies, such as photo slides and VHS tapes, into digital, DVD gold, giving the contents of fragile older media a longer lifespan. Transfer the VHS tape of a favorite cat’s college graduation to DVD ($20), and give backup copies to the rest of the pets for academic inspiration ($5/copy). Static film slides can be transferred onto a DVD made dynamic with musical accompaniment ($0.15/slide, plus $15 to create DVD with music). N-code's video guys have shot and edited film for more than 25 years; thanks to their collective experience and dedication, most video jobs are completed in 24 to 48 hours.

OK, it’s not Walt Whitman.  But it’s a lot more interesting than that dry read from the production director, who is buried under piles of work orders and spec spots.

To outsiders, Groupon is about aggregating subscribers and setting up deals.  But on the inside, it is about hiring talented, well-educated copywriters who have that certain flair with words.  In a way, Groupon is operating on a model that once guided radio stations: get the buy, but write stellar copy to create compelling, resonant commercial messages.

This is the difference-maker with public radio today.  News on the radio (and in all media) has become a commodity – just like deals, music, and laptops.  The defining difference for NPR and the many public radio stations is the way in which they strive to set a cultural tone – to create a feeling, a vibe, even an aspiration.

This dedication to craft is what sets NPR apart from “regular radio” and what makes Groupon different from other eCoupon companies. This is the bet that both brands are making in a world where we have more of everything.  As more and more online coupon companies pop up, the idea that more = better is something that Groupon is bucking up against as it makes the effort to stand out.

Does a quality sell work in 2011?  Do people even notice?  Is it worth the time, trouble, and expense to pay professionals to write prose for deals when many people struggle to spell the President’s name?

Let’s watch Groupon’s IPO come together, the competition rise to the challenge, and see if, in fact, the pen is mightier than the source code.