There’s something interesting happening at the crossroads of television programming and social media that is worthy of our attention.  While many of us are addicted to consuming TV shows through a DVR for maximum convenience, there’s a sub-event occurring around live programming.

There are certain real-time events that don’t make sense for the DVR – the Super Bowl, the Oscars, and American Idol that you just have to watch live.  And recently, the ratings for some of these programs (except the Oscars, but you could understandably lay the blame on the choice of James Franco and Anne Hathaway as the pathetic hosts) have actually been stronger, despite the media fragmentation. 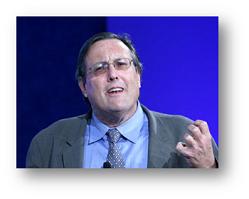 That’s because as Dr. Jeffrey Cole (pictured) of USC Annenberg explained at a recent speech called “The Changing Face of the Internet,” the communal aspects of television viewing is part of that medium’s history.  Most of us grew up, sitting around the rec room or den with our friends or family members, watching Cheers, L.A. Law, or Seinfeld.

“We’ve always had co-viewing at home with other people in the room, but now we’re seeing co-viewing through social networking where people who are not together are watching as if they were together.”

This experience is being amplified thanks to real-time social media tools, like Twitter.  I can tell you that my TweetDeck silo during the Academy Awards broadcast earlier this year was far more entertaining than what you were watching on the screen, or even whatever quips you were hearing from others in your living room.

That’s become the case every time there’s a major sporting event or TV show that viewers are compelled to watch live.  If you remember the old Mystery Science Theater 3000 on The Comedy Channel/Comedy Central where the robot characters quipped throughout old sci-fi movies, then you have a sense for the fun and joy that come from watching TV while enjoying the cleverness, snarkiness, and witty comments from your “friends” and “followers” via social media.

NBC is attempting to corral some of this conversation with the creation of a new social platform, NBC Live.  It will contain polls, trivia, photos, and an ongoing social stream where users can comment about what they’re seeing on the screen along with thousands (millions?) of others who are logged in. 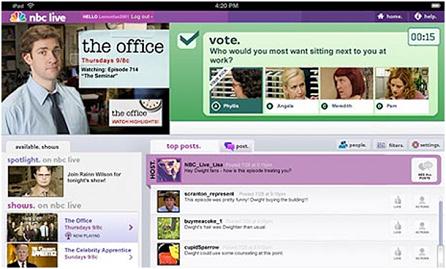 For NBC, the aim is two-fold: get consumers away from the DVR habit for a TV event or show, and to attract them from Twitter or Facebook and onto their proprietary social platform.

By the way, there’s probably a third goal here, too.  The chances of viewers watching commercials – whether they realize it or not – runs a lot higher during live programming than on a time-controlled device like TiVo.

By the way, this communal phenomenon also occurs on “The Backchannel,” that Twitter community created by anchorman Stephen Clark here in Detroit.  We showcased Stephen at last December’s Jacobs Summit, and we’ve discussed the phenomenon of news viewers participating in the content creation of the 11 o’clock news on this blog on our website.  In many ways, watching the Twitter comments in real time on #backchannel is indicative of this social viewing experience.

So what’s the application here for radio?  Or is there one? 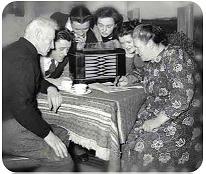 Seven or eight decades ago, people sat around their living rooms and enjoyed the radio together as a group.  As radios became ubiquitous and portable, listening became more personal and solitary.

Fast-forward to today.  Is it feasible for those who have a favorite morning show or who follow a talk show to log-on, participate, and comment simultaneously?  Is it of value when a station interviews a music star to encourage listeners to use social channels to have their own running conversation about the content?  Why wouldn't a personality show want listeners to send in content - audio, video, links - in real-time during the broadcast?

TV is beginning to understand the importance of a two-way exchange with its audience.  They realize consumers will multi-task – watch, chat, and share feelings, jokes, and observations at the same time.  And that dialogue can enhance the experience and build a greater sense of loyalty and a new dimension to the act of consuming video content.  This is a different kind of engagement that brings out the emotions, humor, and shared experience of enjoying (or hating) the same shows in real time.  It is not like watching a YouTube video.

In radio, we are still BROADCASTING, and the audience is passively listening (with the exception of talk and sports talk radio).  Until we figure out that a new dynamic to enjoying media content is to converse and socialize, we won’t unlock some of the wonderful possibilities that come with creating great radio where the audience can interact with us - and with each other in real time.

I cannot envision listening to Pandora and discussing what song comes next with friends on Twitter.  But I can imagine listening to Drew & Mike or Preston & Steve or B.J. Shea and having an ongoing dialogue with other people enjoying the same show.

If we open our eyes to new ways for our audience to enjoy and consume our programming, we just might develop new channels, new revenue streams, and better engagement with our rapidly changing audience.

Thanks to the maestro, Dave Martin, for bringing Dr. Cole’s speech to my attention – via Twitter.

Very smart, because new research shows that around seven out of ten tablet/smartphone owners use their device while watching television.

And yet Nielsen neglected to give options such as "listening to the radio," "listening to music," etc. It also makes sense for radio to devote more -- much more -- resources to nighttime programming when the audience is active. But far too many stations simply punt with voice tracking or syndication, thus missing out on the interactive possibilities that now exist.

Back in 2007, I was in conversations with a company named PalTalk about creating & helping them market this type of backchannel for radio morning shows & connecting the conversations to their websites. In the end, they decided to move forward without me & had created a deal with CBS Radio but I never heard anything more about it. Nevertheless, with today's technologies, the concept seems even more viable for radio shows/ stations and their "listener communities".

Thanks, Buzz. Like so many of the loyalty and engagement ideas we shared back in those days, we now have the social tools & digital assets with which to make them happen. We just have to step outside our comfort zones - like Stephen Clark did - and imagine how to reach out & connect with these communities. Thanks for chiming in.

This was an excellent blog post and well timed as discussions related to conversational viewing, second screen apps for mobile devices, and the technological convergence of television and the Internet have been very hot topics within the industry as of late.

In my mind this technology has the potential to do two things really well:

1. It will add value to the live viewing experience.

Prior to the social web there really was no difference in experience between watching a television program when it aired or recording it on my DVR and watching it later, other then being able to fast forward through commercials. Now with the addition of social media platforms I'm instantly connected and able to critique shows (a la Mystery Theater 3000, that's my thing anyway :)) with people around the world. It will definitely draw me back for the live viewing experience.

2. It will help advertisers who are struggling to reach viewers.

Advertisers are already creative with ad placements in shows and if they can move that to the social media platforms and second screen apps that television networks are launching there is real potential for success.

This was a really good summary blog post! Very enjoyable and I've shared it among my social network.

Michael, thanks so much for the timely and well-thought out comments. We all appreciate your views and observations. I firmly believe that this can work in radio - but we have to try it somewhere where talent and the audience are ready for conversation.

Thanks again for taking the time, sharing the post, and making a contribution.