I enjoyed last Friday's post from Lori Lewis about the need to use metrics in determing social media success.  But looking at the bigger picture of brand success, I would suggest to you that it is the unmeasurable qualities that often make the difference between winning brands and losing brands.  With all those metrics, analytics, and talk of ROI, there are certain intangibles that are keys to winning. 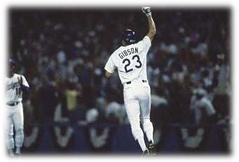 Today, former Detroit Tiger and L.A. Dodger Kirk Gibson is improbably leading the Arizona Diamondbacks to a very respectable record in the NL West.  When asked how a team with no stars is over-achieving and keeping pace with the world champion San Francisco Giants, Diamondbacks GM Kevin Towers attributed this new-found success to Gibson:

“The team has taken on Gibby’s personality.”

The tone with Gibson was set many years ago, and is typified by a true story that occurred when he was traded to the Dodgers in 1988.  The team wasn’t doing well, and during spring training, another player played a typical prank on Gibby – the old shaving cream in the hat trick.  Instead of an easygoing reaction, Gibson exploded and questioned the team’s intensity, openly suggesting that these types of pranks were part of the reason why the Dodgers were losing.  The team went on to win the World Series that year, punctuated by Gibson’s famous home run that always makes ESPN’s list of clutch plays, like a scene out of “The Natural.”

Fast-forward to Gibson’s first managerial gig with Arizona, and you have some insight into how any organization can succeed on the strength of sheer leadership - without management seminars, off-sites, and the other crutches that companies use to try to manufacture results.

Sometimes it’s so simple to asssess which organizations, brands, and yes, even radio stations are successful with three simple tests:

1. It’s in the walls. Walk in the front door and down the halls and you’ll immediately determine the stations that have energy and pride.  Some stations – and I often think of stations like 98Rock (Sacramento) and KISW (Seattle) – simply exude a fun, exciting, and vibrant atmosphere.  When I visit operations like this, it almost makes me want to get back into day-to-day radio.  (OK, not really.)  On the other hand, you can sense a station that is bland, vanilla, and lifeless, too – the operations that look and feel like insurance companies – not living, breathing entertainment outlets.

2. A station takes on the personality of its PD. This goes right back to the Gibson story.  And I see it every year as I visit client stations or assess the competition.  All the ratings, research, and other tools in the world can’t make up for dispirited or unimaginative PDs.  On the other hand, the motivated, energetic, don’t-take-no-for-an-answer programmers find a way to win – with or without the tools.

3. The tone you set in the first 30 days…
…is the tone you live with for your entire time programming a station.  Gibson took care of that with the Dodgers in '88 in spring training and it helped carry the team to a championship.  Conversely, we see PDs who commit serious flaws in that first month, assuming they understand the culture or the people, installing a template that won for them in the past, or simply not communicating with the staff in a meaningful, honest way.  Programmers who are cognizant that all eyes are on them during that so-called “honeymoon period” are the ones with the best chance of success.  That’s not to say that it isn’t possible to reinvent oneself, but it’s truthfully difficult once those first impressions harden.

None of these traits is rooted in ratings analysis, music scheduling, or applicant testing.  But they are often visible and in evidence in successful operations, be they public or commercial radio – or perhaps in any business enterprise with a staff of five or more.  If you open your eyes, you can see them - or the lack of them - clearly.

Setting the tone is a difference-maker.

With thanks to Scott Adams.

Excellent post Fred. You always win the heart first and everything else second!(Audience and staff)

(Plus thanks for that GREAT memory from the 84 series..I remember exactly where I was when Gibby hit that rocket!:)

Dave, as a Michigan guy, I know the Gibson story is especially resonant. It is great to see Gibby winning in AZ, and it's a lesson to all of us that attitude and fire in the belly trump metrics any day.

Thanks for reading our blog & taking the time to join the conversation.

Having been part of so many start-ups and turnarounds, this really resonates with me. You can have all the other tools and perks but without the right vibe, it means nothing. Having the right vibe MINUS marketing/research/great budget, nice facilities and huge signal...well, we've all seen a great culture overcome a bunch of other shortcomings.

Thanks, JJ. I have seen it again and again. And it's something that Simon Sinek preaches in his "Start With Why." People don't buy what you do - they buy WHY you do it. In Gibby's case and for all the truly inspirational PDs out there, it is about following a person who sets the tone, creates a culture, and inspires her troops.

Thanks as always for reading and contributing to JacoBLOG.

Please allow me to suggest...as managers, our expectations of staff can often become self-fulfilling prophecies. There's an excellent HBR article on this theory - Pygmalion in Management by J. Sterling Livingston - it's available via this link
http://hbr.org/2003/01/pygmalion-in-management/ar/1

In my experience the single most important person in a broadcast station is the general manager. The GM has an inordinate impact on the probability of business success. It's possible for an average GM to achieve success due to above average team leaders (PD, SM, DOS, BM, CE, et al) however such success is, typically, unsustainable. Once the average GM loses the great PD (or gifted DOS) continued success requires hiring or promoting the right successor. This creates exposure. Hiring and succession planning - casting the right players - remain critically important skill sets.

The truly great GMs have a deep understanding of casting, one that gives them a strong competitive advantage in attracting and retaining the players required to sustain successful performance. The great GMs also respect another bit of Paul Drew's wise counsel "Find the best replacements for your staff before you need them."

As always, Dave, you bring great value to this conversation. Your point about GMs is dead-on - and something that I sometimes overlook due to my "PD mentality."

When I was programming WRIF back in the early '80s, our quarterly bonuses were largely discretionary. After getting some great ratings, I was expecting the maximum bonus, only to find out that I was to receive 75% of my potential dollars. When I asked my GM, John Hare, why I didn't get the total pie, he said, "Your replacement isn't on staff."

At the time, I was upset but after thinking about it, he was right (and cost-effective). The health of the entity is always more important than any one manager or employee.

I subsequently worked hard to ready both my APD, Mark Pasman, and my MD, Mike Mayer. Both went on to program the station after I left WRIF to form Jacobs Media. That's a tribute to both of them, and to Hare for recognizing the importance of a great succession plan.

In today's world of radio, most GMs oversee multiple brands in the cluster, making it even more difficult for that person to become MVP of the operation, and to "cast" the future of several stations.

Thanks again, Dave, for the wisdom and perspective.

May look funny, but the source is reliable.