JacoBlog - Jacobs Media's Blog: Where The Puck Is Going 2

Where The Puck Is Going 2

This morning’s post is a collaborative effort from Fred Jacobs and Ralph Cipolla.  Fred is clearly living in the here and now.  Ralph, however, is prepared to go where no researcher has gone before – the year 2021.

Yesterday, we took a first look at Techsurvey 7.  One of the most effective tools for looking at multiple data points in our surveys is the Media Usage Pyramid.  This is where we aggregate many questions about gadget ownership, media consumptions, and behavior in one large, all-encompassing graphic.  Below is the pyramid for TS7.  Down the right-hand column, you’ll see percentage change from year to year, where applicable. 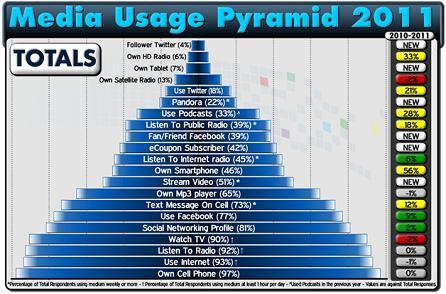 Moving up the pyramid, note that more than three-fourths are now on Facebook.  And a bit higher, we’re now seeing smartphone ownership near the majority tipping point – a whopping +56% from last year’s survey.  Between the holidays last December and Verizon’s ability to carry iPhone, mobile continues to skyrocket.

Some other highlights – and new entries – include subscriptions to services like Groupon (an amazing 42%), as well as those who have clicked “like” on one of our participating station’s Facebook pages.  Note also that while satellite radio continues to flat-line in our surveys, HD Radio inches upward, while tablets (mostly iPad) had a nice debut at 7% (the lowest number it will ever be).

And then there’s Pandora, where more than one-fifth (22%) of our respondents listen weekly.  We have talked about this pure-play competitor in our blog many times in the past two years – and this is a big reason why.  If radio ignores Pandora or concludes that it’s “not radio,” it does so at its own peril.

But what about the future?  Where will we be in two years, in five years, in a decade?  Well, Ralph Cipolla, has his Vulcan ears on, and has perhaps done a mind-meld with one of your listeners from 2021, allowing him to put together this predictive pyramid of what our Tech Survey 17 Media Usage Pyramid will look like – ten years from today. 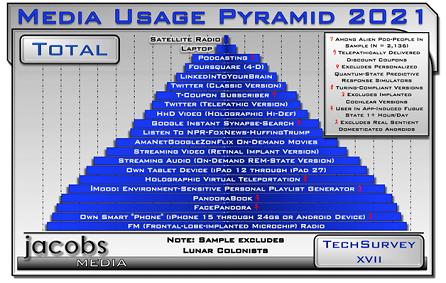 It’s nice to see that FM Radio will remain dominant (although the frontal-lobe implant microchip has yet to be invented).  It appears that Pandora will still be a force to be reckoned with, along with Facebook.

And don’t forget to look higher on the pyramid for clues about how Twitter, couponing, and even satellite radio will fare a mere decade – or four tech lifetimes from now.  We would love to hear your predictions, too, so feel free to comment away.

Thanks again to our 70+ stakeholder stations, along with the 20,000+ respondents, and all of you who took the time to see the results in our webinars.  Also, thanks to Tim Davis for his infographic design work on TS7.  You can check out our cool Techsurvey 7 infographic created by Tim by clicking here. And thanks to AllAccess for their partnership.

For a free copy of the study's Key Points, contact
Lisa@JacobsMedia.com

We will be back next year with Techsurvey 8, and we can’t wait.

Not according to this Google Trends graph, which shows the little interest in HD Radio has been trending downwards:

Greg, you're talking apples and oranges. Google Trends measures search. Our data indicates sales. Note that Techsurvey7 is conducted among core radio listeners. The HD Alliance (and everyone else involved in this initiative) will tell you that the best prospects for buying an HD Radio are people who already enjoy listening to radio in the first place.

Our data is solid, and the trend line is career. As we stated in the analysis and webinar, HD Radio still has a long way to go in a challenging, competitive arena that is loaded with new gadgets, fads, tech, and toys. But their arc is positive.

If you look at the graph, I included searches on "hd radio" and "hd radios". Google Trends measures consumer interest through searches over time:

"With Google Trends, you can compare the world’s interest in your favorite topics. Enter up to five topics and see how often they’ve been searched on Google over time.

I know, Struble claims that HD Radio sales are doubling each year. By the end of 2012, there will be a total of 12 million HD radios sold, or was that 8 million? Of course, HD radios have all but vanished from the sales floors of the major retailers. You can pick up the Gigaware adaptor for $20 at RS, now on clearance (used to be $79).

Looks like Radio Shack and Amazon are dumping their HD Rado inventory:

As I stated before many times, virtually no one outside the radio indusry is interested.

Greg, this is a chat board - not research or sales data.

We stand by our Techsurvey7 research. The way I've explained it in webinars, releases, and in interviews is that HD Radio continues to trend up, but the numbers still pale in comparison to other gadgets. There's progress, but a long way to go.

I respect you having a different opinion. Thanks for reading the blog.

"New York Times technology columnist David Pogue published a great article on HD Radio last week. He's got 100,000 Twitter followers and asked them who was using HD Radio. Sixteen people replied. Three of them worked in the radio industry. Of the latter, all were concerned for the future of the platform."

Greg, we all know that you don't like HD Radio. But you've missed Fred's point. There continue to be new technologies out there that compete with radio for the consumer's attention. Radio has weathered that storm in the past (8-track, cassettes, CDs), but the leaps in technology and the ability essentially to do everything (listen, watch, text, call) from a mobile location (think Smartphone), is competition that radio cannot choose to ignore. Where digital radio fits into that remains to be seen.

Fred, I think it's hard to predict what media will look like even 5 years down the road. What new technology or app will emerge that might supplant Facebook or Pandora or even the iPad?

I've just read articles that suggest some deterioration in the use of Facebook but it is too soon to tell whether it's just a blip or a trend.

It does suggest that as time goes on there is 'fatigue' with whatever the latest cool thing is. Look at your MP3 number - it's flat now.

In the meantime, Twitter's awareness far and away exceeds its usage, yet it's constantly in the press. So how much of what we see/hear/read is hype due to good PR (similar to what happened when satellite radio first emerged) vs. reality?

The Tech Survey is a nice benchmark of trends so keep up the good work and keep keeping us informed.

Kitsa, thanks for writing and offering some perspective. There's no question that we DON'T know what's coming. At the CES in 2010, netbooks were the rage. At this year's show, it was tablets (and netbooks were like 1982 Chevy Novas).

We appreciate you reading our blog and taking the time to comment.