Did you ever get a cool gift from someone who cared about you – and instead of unwrapping it and putting it to use, you let it sit on a shelf because you were too busy to enjoy it?

I’m hoping that doesn’t happen with the gift that B101’s Jerry Lee has given the radio industry.  While everyone was buzzing about Jerry's pronouncement that streaming is a bad business model, the industry may have missed the bigger headline.

After years of research – and who knows how many thousands of dollars – Jerry has gifted the industry he loves – RADIO – with a toolkit that any station, big or small, can immediately put right to use.  It’s called Write To Engage. 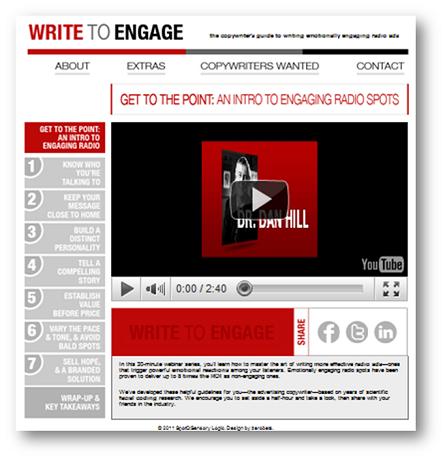 Jerry was one of our featured orators at the “President of Radio” panel, part of our Jacobs Summit in Austin back in 2008.  When we met in our conference room and said our hellos, Jerry immediately started speaking to me about the science of facial coding, and how it is a window into the emotions of consumers.  He told me that it was an amazing technology with which to test commercials.

I had no idea what he was talking about, but as a researcher, I was intrigued.  Back from the conference, I Googled the topic, and thought about some of the emotional research concepts that my former boss, Frank Magid, worked on back in Marion, Iowa, in the ‘70s.

Now three years later, Jerry has come forward with the not-surprising news that only one of five radio ads engages the listener.  (Actually, that sounds on the high side.)  Very few copywriters have the time or training to really think about the messages they write.  And when salespeople are creating much of the copy that stations end up producing, we shouldn’t be shocked to learn these spots are simply ineffective.

And consider the result of bad copywriting.  The chances are good that commercials that fail to engage don’t work.  And when the advertiser connects the dots, the odds that they’ll return to your station – or to radio – diminish greatly.

I have worked with so many clients who make statements like “Outdoor doesn’t work,” when in fact, the lack of their impact was due in large part of lousy billboards that didn’t connect with consumers.  That happens to radio, too, at a time when we can least afford to lose any categories to online or other advertising sources.

Gordon Borrell’s new study about automotive advertising, for example, forecasts a 7% overall gain in 2011, but only a 2% increase for radio.  Interactive, in the meantime, is predicted to increase by 11%, so the pressure for radio reps to break through and get noticed will only intensify.

Great creative can help.  And after engaging Dan Hill, the head of Sensory Logic, Jerry believes he has hit on a basic tutorial in how radio can bring its A Game to copywriting.

And because he is a fan of radio, he’s giving it to the industry.  So the ball’s in our court.  Will this program become a mandate for every production director, copywriter, salesperson, and even programmer who has a hand in crafting those commercials that we hear in two, three, or more stopsets an hour?

One can only hope.

Then send him a thank-you note.