I did the math the other day, and the sad truth is that I spend approximately 75 nights a year in hotels.  They vary quite a bit because most of the time, I’m dependent on clients for setting up trades with local hotels.

Something that is changing in the hotel industry revolves around increased use of technology.  You’re seeing more hotels that are communicating via email, and kiosks in lobbies (and the TV) for checking in and checking out. 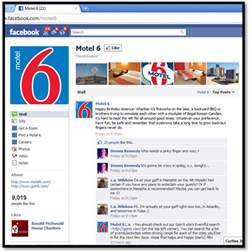 But on the social media front, things are beginning to heat up.  A recent TripAdvisor survey release notes that nearly six in ten hoteliers will be increasing social media expenditures this year.  Nearly a third are launching mobile marketing programs.

But it’s in the online review area where hotel chains and even B&Bs are really focusing their attention (check out how active Motel 6 is on their Facebook page).  That’s because recommendations are the Holy Grail, while conversely, bad reviews can be a killer.

Consider this: 99% of these respondents say they planned to respond to online guest reviews.  And that leads us to a conversation about clout – or klout.

If you haven’t run across it yet, there’s a social media grading service called Klout that rates your influence and impact on the Internet.  Here’s how they describe it:

The Klout Score is the measurement of your overall online influence. The scores range from 1 to 100 with higher scores representing a wider and stronger sphere of influence. Klout uses over 35 variables on Facebook and Twitter to measure True Reach, Amplification Probability, and Network Score.

Just when you thought high school was over, your social media acumen and ability is being judged by a series of metrics that Dave Wieneke, the director of digital marketing at Sokolove Law in Boston, describes as “A credit score for your reputation.”

In a Boston Globe article about Klout a few months back, several analysts commented on the rising clout of Klout in the celebrity industry, as well as businesses like hotels. Augie Ray, a senior analyst with Forrester Research noted that “A company can afford to anger a customer with a Klout score of 15 but probably can’t anger someone with a Klout score of 95.”

And there’s no question that in the not-so-distant future, hotels will be asking for Twitter handles over email addresses so they can look you up – or even upgrade you if you have a great Klout score.  It is reminiscent of when the staff recognized the food critic for the local newspaper when she walked into their restaurant.

In the meantime, our Lori Lewis is adamant about the “false positives” of Klout, noting that social media impact is earned by the quality of your relationships, and not how many friends and followers you collect, feels Klout may not be the benchmark it's portraying itself to be.

But it’s hard to ignore scores, in the same way that we pay attention to countdowns and other lists.  I hate myself for admitting it, but I check my Klout score around monthly and always feel a little bad about it.  Whatever I’m doing on social media should speak for itself, and not be subject to a grade.

I notice that when I’m not active on Twitter for a few days, my score drops.  And when you start programming to a number, you’re in trouble.  Just ask any program director.

Social media as an indicator of who we are as people is a dangerous game.  And one that more and more individuals – and businesses – are playing.

I really enjoyed today's blog Fred. My favorite part is when you said, "I hate myself for admitting it, but I check my Klout score around monthly..."
Klout is nothing but an opportunist trying to cash in on validation needs some people have.

You are a great writer and one of the most influential radio people of all time. That is fact and Klout, being the gimmick it is, will never be able to relay that to people who need to know that. Fun Blog!

Agree, Lori. I get more satisfaction from personal, direct feedback. The ultimate barometer is how often the Jacobs blogs are RT and shared on FB, IMHO.

Thanks, Lori and JJ. True success in social media is something's that we may grapple with for years to come. And that won't stop companies like Klout from trying to quantify success.

Thanks so much for the Klout alert, Fred! Klout is such a crock ... or should I say KROCK?

Naturally I took the necessary steps to see my score (10). Interestingly, when I checked my Facebook friends, it listed your score as "10" as well. Weird.

Oh no...just what my OCD DOESN'T need. I am now obsessed with improving my KLOUT score. It's the same feeling I had when I was trying to pick out the correct cumberbun for prom. I will always be Steve Sanders from 90210. Seriously. Thanks for making me aware.

Harvey, thanks for my bad Klout Facebook score update. I have become a Twitter guy where FB takes a back seat. Oy!

Danny, it IS like high school - only digital and possibly more annoying. Thanks for commenting.