The Pew Internet & American Life Project has just released their first standalone study about smartphone ownership.  I'll sum it up for you in two basic findings:

So no matter whether you program, sell, or own radio stations, this phenomenon touches your business in so many different ways.

And if you've seen our Techsurvey 7 presentation, you know that smartphones combine critical mass with out-and-out passion.

Here's a word cloud that depicts how cell phone owners describe their feelings for their devices:

If word clouds existed in 1975 and you asked consumers about how they felt about radio, it may have looked similar.  But radio has always been about entertainment, and the best smartphones are only as good as the content they bring us.  That's the challenge and the opportunity of the smartphone experience.

What groups have the greatest propensity to own a smartphone?  Pew reports that the wealthy, those under 45, and African-Americans and Latinos are the most likely groups.  And if that doesn't define diversity, I'm not sure what does.  This suggests that smartphones touch everyone.  While the better educated and deeper pocketed folks are more apt to lean toward iPhones, while the less well-heeled go for Android devices, there's no question that there's a smartphone for everyone.

Finally, Pew looks at the growing percentage of smartphone owners who access the Internet: 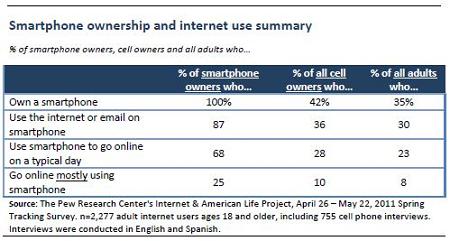 Having an app is not a mobile strategy.  This space continues to be a tech and lifestyle phenomenon the likes of which we've never seen.  As Google's Eric Schmidt reminds us in three words, "Think Mobile First."  That's good advice for all of us.