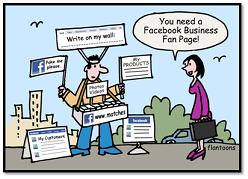 Like many of you, I’m inundated by research, email advisories, push messages from Mashable, and a variety of other studies, lists, trends, and predictions.

The best you can do is read as many as possible, sift through the best of the lot, and then do a lot of synthesis in an effort to learn more and identify bona fide trends.

That’s why two different emails I received within an hour of one another last week caught me off guard – and made me laugh.

The first was an article in Inside Radio titled “Social media now routine part of the buy.”  It quoted Omnicom CEO John Wren who stated that social media has become routine in designing campaigns – that it is simply “becoming just part of the normal process that we go through.”  He described social media elements as “pretty much the norm” for advertising and client promotions.

And then there was the second article in eMarketer Daily – “Executives Fail To Focus On Social Media Marketing Strategy.”  And you can count on the fact that it essentially contradicts the Inside Radio piece.

The story estimates that while 80% of companies with 100 employees or more will use social media marketing in 2011, most don’t believe that crafting a social strategy is a major priority.

In fact, the chart below shows that nearly half of these companies – 47% - contend that social media is “necessary, but not a strategic priority.”  This is true for both small and large companies. 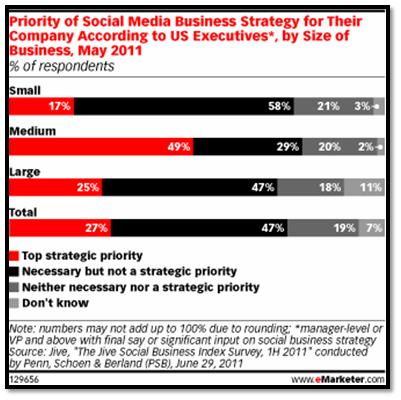 So, a bit of a disconnect, right?

But perhaps the main takeaway is that social media is very much in the mix.  And it’s a real topic in business and agencies.  But as the eMarketer article notes, there is still considerable confusion about social media strategy.

This feels a lot like what’s happening in radio.  I’d bet that at least 80% of stations are involved in one way or another.  But many come up short on strategy.  There’s a lot of confusion, no shortage of “experts,” and new social networks, plug-ins, or components popping up seemingly on a daily basis.

Perhaps this is the year when radio makes a giant leap in the “figuring it out” department.  We’ve hired Lori Lewis to help our clients make sense of it all, devise their strategies, and connect with their audiences.  One of our tools is a basic chart (a piece of which is shown below) that categorizes 13 different channels, pointing out the areas in which they are especiallly effective as well as those where perhaps they come up short. 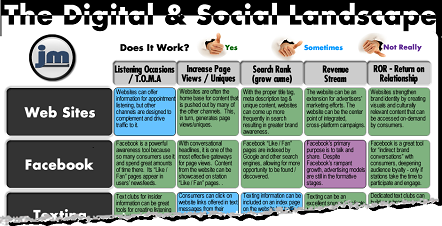 What is your company’s social media strategy?  What about your station?  And what about you?

Let’s continue to talk about social media in this blog and when we connect with each other at conferences and during market visits.

The strategy is indeed the thing.

Great job done by you. Your analytical chart is very perfect. I would like to appreciate your work. Thanks for sharing this one.