As we learned up close and personal in “Goin’ Mobile” last year, social media and mobile are dual accelerants – each feeding off the other – and growing in ways that were previously unimaginable.

Facebook’s impact on our lives continues to amaze us, as the numbers rise meteorically, including people that we never dreamed would be involved with social media.  How many times a day do you hear the word Facebook in conversation and in media?  (More than you hear Google.)

And then there’s mobile.  In Techsurvey 7, we saw smartphone acquisition rise 56% from last year’s study.  And we’re nearing that majority tipping point with our rock radio respondents.  Many analysts believe that smartphone sales will grow by more than 50% in 2011 in the U.S.

Social feeds off mobile – and vice-versa.  And to illustrate this symbiotic relationship, a newly released comScore study, “The State of the U.S. Mobile Advertising Industry and What Lies Ahead,” shows that the biggest year to year increase in mobile is its use for social networking.

In March 2010, 40 million U.S. consumers accessed social media with their phones.  One year later, and that number has exploded to 60 million – up 45.7% (circled on the chart below). 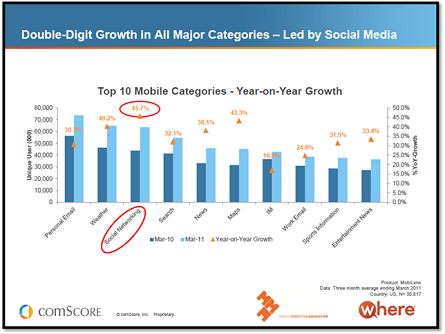 So how does this data inform your mobile strategy?  If you have a mobile app – congratulations.  The opportunity to be on the hottest devices ever is a plus for your station and helps to give your listeners a chance to hear you in more places, not to mention a sense of cool.  Give yourself an extra 10 points if you have an individual station app, allowing you to truly showcase your brand right alongside Pandora, Facebook, Google Maps, and the New York Times.

But if your app doesn’t include social media connectivity, the comScore data suggests that you may be missing a golden opportunity to better engage with your rapidly mobile audience.  The chance to go right to your Facebook page or your morning DJ’s Twitter feed while your audience is in the dentist’s waiting room or watching their kid’s ballet recital or in between innings of that baseball game is too big to pass up.

Give your app the once-over and make sure that it’s socially in-sync with the changing tastes and habits of your audience.  Google’s Eric Schmidt pointed out in a speech earlier this year that one of the implications of smartphone ownership is that we’ll never be bored again.  If you carry a smartphone, you know exactly what he’s talking about.  We have never seen a time or boredom killer quite like the smartphone (or tablet).

And given the consumer’s need to be in touch – especially via social media – chronicling even the most mundane aspects of their lives in words, pictures, and videos – social media connectivity via phones is a natural confluence of culture, connectivity, and technology.

We have not witnessed a greater change in overall lifestyle and business communications in our lifetimes.

Decades ago, radio set the pace for live and local entertainment, music discovery, and current events in hometowns everywhere.

Now more than ever, radio needs to keep pace with its listeners who are very much setting the pace themselves.

Tomorrow, we'll get a little LOMO on you as we take a look at he incredible local mobile revenue opporunity and why it will only get better.