Underwear On Their Heads 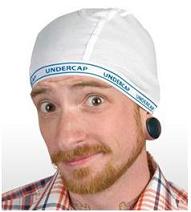 More than a decade ago, our company partnered with a couple of other smart players to launch a web-based advertising company called “Fastblast.”  It was a cool idea that involved geo-targeted ads on websites to drive traffic to radio station sites.

At the time, we also were pitching a global-based web company that you have all heard of and used.  The idea was to use the power of local morning radio to drive traffic to this site. They were just a startup, attempting to figure out their media and marketing strategy, and our little group was in the mix to help them build awareness and web visits.  The radio component was novel, and there was definite interest.

Several people in this fledgling company were very high on us, but the last hurdle was to get the green light from their New York City-based ad agency.  Our entire team flew to the Big Apple for our meeting. As we sat in one of the most spacious conference rooms I’d ever seen populated by their upper echelon of their executives, we rolled out our plan that heavily involved influential morning shows in key media markets to get the word out about this web-based program.

As we got up a head of steam, a question arose from one of the higher-ups in the agency:

“Morning radio, you say.  Isn’t that just a bunch of DJs running around wearing underwear on their heads?”

The room went silent, and the meeting essentially ended with that comment.  As we scrambled to try to counter that perception with anecdotal and statistical evidence about the value of morning/personality radio, the air was rapidly hissing out of our balloon.  Perceptions run deep, and in this case, they were more than six feet under.  Their impression of morning DJs was akin to the barker at a cheap circus carnival - a low-rate, zany form of entertainment that was clearly thought to be well below the image of their valuable up-and-coming web company.

And so we think about radio a dozen years later.  Have we come that much farther?  Has morning radio made itself a more viable part of our business, and have our DJs grown up?

I’ve been thinking about that lately with the return of Randy Michaels to major market radio.  There’s talk of “stunting” (one of my least favorite tactics, by the way), there are already C&Ds flying around, and you can’t help but wonder whether some of those dated Jacorian stunts and antics will make their way into the Chicago and New York markets.

They get attention, to be sure, but they also help to solidify some of the sophomoric perceptions that we witnessed in that agency get-together many years ago.  Guys like Letterman in the ‘90s and Jon Stewart today do a great job of shaking it up within the confines of civility and mainstream entertainment.  On the radio, that’s what Ryan Seacrest is all about, along with hundreds of other morning and personality shows.  So the hope here is that Merlin Media is all about doing great radio, while helping to lift radio as an industry into a positive spotlight.

On that note, there was an interesting episode last week that took place in a small market that did just that.  I realize that whenever there’s a natural disaster, like a tornado, hurricane, flood, or fire, local radio is there to hold it together, help the community, and provide true service.

I am not denigrating that coverage because it is often courageous and beyond the call of duty.  But it is also expected.  It’s like commending firefighters for doing their jobs in stressful situations – well deserved, but also mandatory. That’s why when 97X, a Panama City Beach rock station, offered an hour of airtime to the Westboro Baptist Church in exchange for them not disturbing the funeral of a family that suffered a major tragedy, it was a shining moment for local radio.

Westboro Baptist Church has become (in)famous for their protests of high-profile and celebrity funerals.  They had planned to picket at the funeral of seven members of the Teutenberg family, killed in a plane crash.  And this “deal” by 97X – an hour on the air in return for allowing the family to grieve - effectively derailed the protest.  This story did not get anywhere near the trade press that Merlin Media has received, but it should have.

Stroke Mastro of 97X (of the Doctor Stroke & ShortBus Show) noted that his station made this bold move “to let the family and friends mourn their loss in this tragic event.”  It should also be pointed out that this station is not owned by any of the CEOs featured in Radio Ink’s “Most Powerful” list – but perhaps these are the types of executives and programmers that Eric Rhoads and crew should be thinking about for 2012.

It should also be noted that 97X is a rock station.  They carry Lex & Terry in the morning, and they play bands like Disturbed, Linkin Park, Nickelback, and Papa Roach.  It is of interest to us that given some of the trades’ recent coverage claiming that the rock format is “dead” following the demise of WRXP and Q101, rock stations like 97X continue to serve their communities and stand out as trailblazers.

The list of highly-successful, involved, attitudinal rock stations that are winning in the diary or PPM is too long to mention here.  The rock format (and its variations) is challenged to be sure, but in market after market, it is among the leaders in key demographics like 18-49 adults and 25-54 adults.  And in Jenny Tsao’s Arbitron presentation at their Client Conference last December, the two best-performing stations in the U.S. in those demos were 98Rock (Entercom/Sacramento) and WDVE (Clear Channel/Pittsburgh).  Yes, a couple of great rock stations.

So, long live rock, congratulations and thanks to 97X in Panama City Beach, and let’s hope for great formats and entertainment from new ownership as well as veteran companies.  There's a whole world of agencies and buyers out there who need to understand just how powerful and incredible radio can be.

From a rock programmer, morning guy and long time radio vet--I thank you. I needed to read and hear this today after a two week period of "experts" bashing my format and scaring the hell out of GMs around the country.

Thanks, Kit. Much appreciated. I've taken a few phone calls & answered several emails, too. It's a shame when a couple of rock stations change formats that it starts a "media trend." Fact is, the format is doing great.

Everything here is right on, Fred- from the business's perception of radio- specifically DJs'- to the great importance of what 97X did.

However- if I am a contemporary media buyer, or especially a cutting-edge startup looking to develop my media strategy, I am still going to balk at aligning myself with anything called "Doctor Stroke and Shortbus".

Their actions were undoubtedly commendable, but by virtue of their name alone they reinforce the negative perception of radio- one that is so often accurately lampooned by other outlets.

Thanks for the comments. Regarding the name of the show, I will advise them to change it to "Jeff & Jer," assuming it's available in Panama City Beach. Appreciate you taking the time.

Bubba the Love Sponge has done this in the past as well, trading airtime on his show to the Westboro crew in exchange for them agreeing not to protest at an area funeral.

Thanks for this - it's bold but a service. Thanks for reading our blog & joining the conversation.