We all bought into it.  Back in the ‘80s when the living was easy and a great book led to automatic sales, radio did what the agencies ordered them to do – moved as many formats as possible to the 25-54 “sweet spot.”

A quarter of a decade later and it's still the “money demo.”  While there will always be CHR and Hip-Hop stations focused younger, formats that chase after 55+ listeners have become virtually extinct. If you question this, tell me the last time you participated in a survey research study where the client OK’d the inclusion of respondents north of the 25-54 standard.

So you won’t be surprised to learn that aging Baby Boomers continue to be overlooked, despite their heft and massive buying power.  The chart below from a recent article in TheStreet.com pretty much tells you all you need to know about opportunities lost: 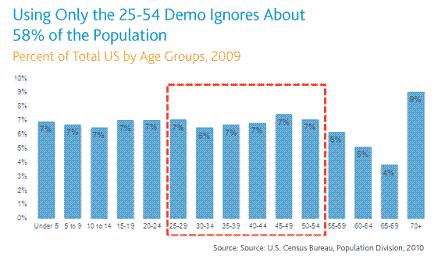 The 25-54 demo leaves out about a quarter of the population - the folks who have aged out of that three-decade oasis.  Nielsen’s SVP of Insights & Analysis, Pat McDonough, notes that “marketers are missing the boat if they’re not targeting the boomers.” According to Nielsen, that amounts to roughly $230 million in sales of consumer packaged goods, of which boomers dominate in 1,023 out of 1,083 categories.

But the beat goes on.  There isn’t a week that goes by when a Classic Rock client doesn’t ask about what we’re going to do as more audience falls off the “25-54 cliff” by making the unfortunate mistake of turning 55.  This is an area where the RAB can have an impact, especially because other media don’t seem to be boomer-focused either.

About five years ago, we wrote a similar blog to this one, imploring advertisers and buyers to rethink this very same issue about media planning and priorities.  Ralph Cipolla created a “Sgt. Boomer’s” graphic that still resonates today.  Everyone pictured in the album cover will turn 55 sometime in 2011, and many are well past that threshold.  With the exception of Beatles Lennon and Harrison, the only member of this group to have passed away in the past five years is Tim Russert. 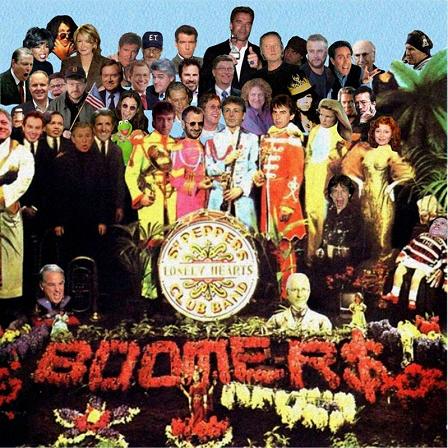 Radio cannot afford to leave money on the table in this changing media and economic environment.  And while it is never easy to change minds and hearts, the evidence that the “25-54 myopia” is harmful to the industry is overwhelming.

In markets where there are multiple rock and AC stations all designed to zero in on this 30-year age cell – opportunity abounds 55+.  So which broadcaster is going to be bold enough to stand apart from the group and go after what TheStreet.com refers to as “the generation getting the last laugh at marketers’ expense?”

There's nothing wrong with a Touch Of Grey.

(If you’d like the key to the Sgt. Boomer graphic, email Ralph.)