I am always surprised to run into radio people who raise an eyebrow when I tell them that Twitter is my preferred social channel.

Even with 200 million users, Twitter pales in comparison to Facebook’s heft.  Our Techsurvey 7 reiterated that while Twitter is on a fast track to growth, the Facebook Nation is four times its size (among our core radio listening respondents).

And daily engagement on Facebook is much higher than Twitter’s – yet another reason why most stations should be thinking Facebook first. 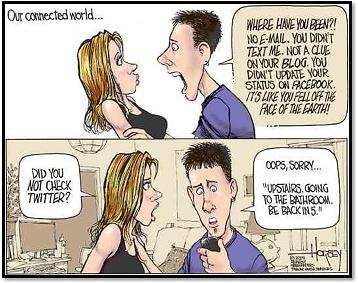 But for me, Twitter is the secret sauce, my conduit to the world, and the way in which I’ve learned a great deal, especially over the past 12-18 months.  For me, it accelerated during my appearance at Jeff Pulver’s “140 Characters Conference” held in Detroit last fall.  I had my quick 10 minute session amidst scores of others with a story to tell about their experiences using Twitter and the real-time web.

Yet, so many look at Twitter as simply a platform where Ashton Kutcher, Shaquille O’Neal, and countless other celebrities write cute missives for their legions of fans.

Yes, there is that side of Twitter.  But for users like me, Twitter is a gateway to knowledge at Mach 3 – a place where I can follow some great thinkers and interesting people (who have no obligation to follow me back), and learn a great deal about media, business, and life in the process.

A recent post in “One Man’s Blog” does a nice job of framing how Twitter has become a powerful social media force.  It’s called “Twitter Evolution: How and Why Twitter Has Been Changing” and it’s worthy of your time.

I can tell you that Twitter is easily the inspiration for at least a quarter of the posts you read in this blog.  And the easy ability to “re-tweet” – send interesting tweets to those who follow me – is another way to quickly and efficiently spread great material and thoughts.

Like other social media sites, Twitter has its downsides.  There are people trying too hard to be clever or simply getting more personal than is desirable.  But compared to Facebook, the incidence of useful information without the fluff is much higher on Twitter.

An important tool that helps make sense of it all is TweetDeck (or HootSuite) – a way to “silo” people and organizations.  Facebook is often a sprawl of disparate thinking.  Using TweetDeck, the people and ideas that matter most to me are at my fingertips conveniently sorted for easy consumption.

A final personal point about Twitter and the amazing way it can connect people.  One of the authors I enjoy reading, Michael Harvey, has a character who is an odd journalist by the name of Fred Jacobs.  A number of people have brought this to my attention, and since then, I’ve read all of Harvey’s crime stories set in Chicago.

The other day, after receiving another note about “Did you know there’s a character in Michael Harvey’s book named Fred Jacobs…?” I did a Twitter search and easily found Michael Harvey.  He is listed under @TheChicagoWay (the name of one of his books) and I reached out to him and asked him for a “follow,” allowing me to send him a Direct Message.  Within the hour, he complied, and we exchanged messages privately on Twitter.  I’m not sure where else that could happen, but I'll bet that many of you on Twitter very likely have similar stories.

As the real-time web has become a part of the atmosphere and hundreds of millions of people are connecting through Facebook and other social networking sites, there’s an intimacy to Twitter and an ability to share connections that is a very unique quality.

And of course, being forced to condense communiqués in 140 characters is great training for writing or being on the air.  It’s a PPM world.

I agree to your site because very information i hope do not stop your work.
Thank you......
http://www.modboxtv.com/